From an article by Barak Ravid in Haaretz

Military Intelligence is collecting information about left-wing organizations abroad that the army sees as aiming to delegitimize Israel, according to senior Israeli officials and Israel Defense Forces officers.
The sources said MI's research division created a department several months ago that is dedicated to monitoring left-wing groups and will work closely with government ministries. In recent weeks, the head of the new unit has been taking part in discussions in the Prime Minister's Office about how to prepare for the possible arrival of a Gaza-bound flotilla in May.

Sometime, its more than simply "delegitimizing" Israel. The Red/Green Alliance locally has no issues about aiding and abetting terrorist organizations such as Hamas 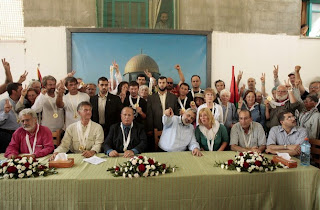 Paul Larudee of the Northern California International Solidarity Movement and friends being feted by Hamas dignitaries in Gaza
Posted by Dusty at 12:57 PM

as well they should! they're almost as bad as the actual terrorists.

does the cia or the dept of defense announce when they are monitoring activist groups?

what is the point of informing the world of this?

The answer is that Israel is a democracy, and that these discussions take place publically. If Israel had known the IHH terror group was on the Mavi Marmara, their approach may have been very different. As long as these "NGOs" receive foreign funding and act in a way that aids and abets terror, they need to be watched.