A mother, father and three of their children were stabbed to death late Friday night in Itamar, southeast of Nablus.
The murders occurred shortly after 10 p.m., when one or two attackers jumped the fence that surrounds Itamar and broke into the home of Ruth and Udi Fogel, aged 35 and 36, respectively. The attackers went room to room, stabbing the parents, a three-month-old baby, Hadas, Elad, three, and Yoav, 11.
Fatah’s al-Aksa Martyrs Brigade claimed responsibility. Their statement claimed the “heroic” operation was a “natural response to massacres committed by the occupation against our people in the Gaza Strip and West Bank,” adding that the perpetrator managed to return safely to his base.
Hamas also hailed the attack as a “heroic operation” and “natural response to Israeli crimes and massacres.” In Rafah, Palestinians took to the streets to celebrate the killings, and handed sweets to passersby and drivers 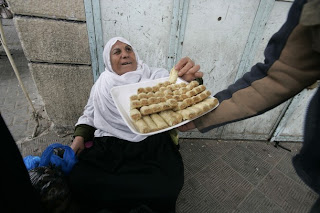 The Day life photo is captioned on their site:
A Palestinian man offers sweets to a woman in the southern Gaza Strip town of Rafah on March 12, 2011 to celebrate an attack which killed five Israeli settlers at the Itamar settlement near the West Bank city of Nablus.

5 settlers???????
It was an Israeli FAMILY.
Three children! A three month old infant.
Unspeakable bias
Posted by Dusty at 4:55 PM

these people have no shame...

May I point out that the diameter of that woman in Gaza rather contradicts the claim that people in Gaza are "starving". And if they are , as claimed "food insecure"- perhaps someone should mention to baby Beluga there to slow down with the chow, and save some for the children.

a 3 month old stabbed to death. wow how heroic. those terrorists must have trained for a long time to pull off such a sophisticated and daring military operation. i hope Israel let's loose Hell on those who took responsibility and praised the murders. aside from all the anarchy going on through out the arab world right now what more do you need to see to convince you that their should be NO PALESTINIAN STATE EVER!