Both independent bloggers and the mainstream Jewish community have documented efforts by anti-israel forces to create "linkage" between very dissimilar incidents. Earlier attempts by fringe groups to show a relationship between local oppression of people of color and Israel's ongoing conflict with Gaza dipped frighteningly in the realm of fantasy, and served as a general incitement to hate and anti-Semitism . 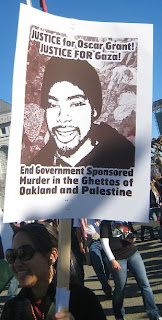 The goal of these events was ostensibly to create alliances, to combat "oppression", but in reality they served to dehumanize not only the Jewish state, but the Jewish community as well. The attempt to link the death of Oscar Grant to the ongoing conflict in Gaza continued on Feb. 22, with a presentation at University of California at Davis, by Malik Ali, an Oakland Iman considered fringe, even in the Islamic community. The talk was promoted with the theme "Politics of Ghettoization", stating "Oscar Grant and the Gaza Seige, two incidents of oppression that coincided in the summer of 2009...East Oakland and the West Bank, two areas with economic segregation formatted along ethnic lines". Malik Ali runs a mosque in Oakland associated with the anti-Semitic Sabiqun movement, which seeks to establish Islamic rule in the U.S. In previous speeches he has praised Hamas and Hezbollah as part of the "Islamic Revival" which will bring "the death of Zionism" and the collapse of the "American empire".


Malik Ali had a surprise when he showed up at Davis. The local Jewish community had mobilized, and 35 members showed up to protest his Jew-hatred. He ended up delivered a different talk that had been promoted. But during the question and answer period, his true nature was revealed again, by his glowing endorsement of Iran's Ahmadinejad.


Malik's primary goal is the overthrow of the American government and its replacement with an Islamic world order. The question remains- why are our public institutions hosting him?
Posted by Dusty at 2:52 PM

i love the part where he says what is happening in iran today is the same as the iranian islamic revolution. sure it's the same in the sense that the iranian people are tired of the ruthless dictatorships that are ruling them. but the difference that Mr. Ali won't tell you is that the dictatorship iranians are rebelling against today are the religious dictator ship that iran ended up with after their beloved revolution. how's that sharia workin out for you folks?

You gotta stand with the oppressed!

Says Abdul Malik expressing support for Iran's Ahmadinejad, Sharia law, and the Palestinians. So where is this "American Empire" I've heard so much about? Puerto Rico, Samoa and ???

why was this man invited to speak before attendees of a charity function in socal?

why has cair, which has posted a now viral video of some seriously hateful remarks and chants from protesters of that event, not noted that the protest was organized as a result of malik ali being invited to speak?

why, when the splc has excoriated this individual for his hate speech and views, have progressive sites around the blogosphere excused the org for inviting ali, because they made a statement that they did not agree with his politics

so i guess its ok for some charity to use the grand dragon of the kkk as a draw....as long as that charity says they dont agree with his politics

am i on an episode of fringe?

It went " viral" in a carefully orchestrated campaign. The anti Israel organizations sent it out, and told people to post and download it to facebook. It was an artificial construct.
And CAIR, in all of their emails, never once mentioned Malik Alis name. They claim a " charity function" was disrupted.

that is the point

cair and al jazeerah, along with some far leftists created this entire incident.

they have also labeled everyone involved as being anti muslim.

yet to this day, cair refuses to condemn malik for his numerous anti american, and anti semitic comments...as well as his 9/11 troofer stance.

here is an example of one of these idiot leftists, who amazingly is frequently embraced by the mainstream media

note his story about his attending a shabbat dinner at a local chabad rabbi's home.

now i no longer have much to do with chabad, but during my younger days, i spent alot of time with a few, and one thing they never did was talk politics at a shabbas meal

im not one to accuse anyone of lying....but as max didnt even bother to investigate what was the initial protest was about, and as he has the penchant of editing vids to make jews look evil...i believe that max is indeed lying.

makes sense that someone so invested in the muslim cause would use al taquiah to bolster his position.

i really hope that cair, al jazeerah and the leftists are taken to task over this smear campaign.

btw...i fully condemn the splinter group of protesters who believe it was proper to spew invectives at the attendees.

Having been to rallies in the bay Area where protestors chanted in Arabic "Itbach al Yahud" (slaughter the Jews), "Falastin balad'na w'al Yahud qalab'na" (Palestine is our land and the Jews are our dogs) , I've personally witnessed inappropriate behavior that was ignored, not only by the ANSWER/ Al Awda organizers, but by their JVP soldiers in arms. This is another "pot calling the kettle black " moment in local activism.

Graet job. That's the secret. Get the community involved to come out-act responsibly-but confront this guy. Beyond his oratory, he crumbles like a cookie.

It is not true that the penalty for apostasy is death by rule of the Koran. The people of Arab countries may choose that punishment under oppressive extremist rule, but Arab law is not equivalent to the rule of the religion itself. Many very religious groups (including ie Christians in Egypt) are very outraged by apostasy.

It is also not true that Egyptian law dictates death for apostasy.

Doesn't Chomsky believe in the right of the Jewsih people to self determination in Israel? Doesn't that make him a Zionist?

The death penalty for apostasy is found directly in the Qur'an in two Qur'anic verses, 2:217 and 4:89

2:217:
They ask thee concerning fighting in the Prohibited Month. Say: "Fighting therein is a grave (offence); but graver is it in the sight of Allah to prevent access to the path of Allah, to deny Him, to prevent access to the Sacred Mosque, and drive out its members." Tumult and oppression are worse than slaughter. Nor will they cease fighting you until they turn you back from your faith if they can. And if any of you turn back from their faith and die in unbelief, their works will bear no fruit in this life and in the Hereafter; they will be companions of the Fire and will abide therein.

What does it mean that the works of those who "turn back from their faith and die in unbelief" will "bear no fruit in this life" as well as in the next?

"Narrated Abdullah: Allah's Messenger said, "The blood of a Muslim who confesses that none has the right to be worshipped but Allah and that I am His Messenger, cannot be shed except in three cases: in Qisas (equality in punishment) for murder, a married person who commits illegal sexual intercourse and the one who reverts from Islam (Apostate) and leaves the Muslims."

Narrated Ikrima, "Some atheists were brought to Ali and he burnt them. The news of this event, reached Ibn Abbas who said, "If I had been in his place, I would not have burnt them, as Allah's messenger forbade it, saying, "Do not punish anybody with Allah's punishment (fire)." I would have killed them according to the statement of Allah's Messenger, "Whoever changed his Islamic religion, then kill him."

Narrated Abu Bruda, "Abu Musa said.....Behold there was a fettered man beside Abu Musa. Muadh asked, "Who is this (man)?" Abu Musa said, "He was a Jew and became a Muslim and hen reverted back to Judaism." Then Abu Musa requested Muadh to sit down but Muadh said, "I will not sit down till he has been killed. This is the judgment of Allah and his messenger," and repeated it thrice. Then Abu Musa ordered that the man be killed, and he was killed. Abu Musa added, "Then we discussed the night prayers .....

Allah's Apostle said, "You will be resurrected (and assembled) bare-footed, naked and uncircumcised." The Prophet then recited the Divine Verse:-- "As We began the first creation, We shall repeat it: A promise We have undertaken. Truly we shall do it." (21.104)

He added, "The first to be dressed will be Abraham. Then some of my companions will take to the right and to the left. I will say: 'My companions! 'It will be said, 'They had been renegades since you left them.' I will then say what the Pious Slave Jesus, the son of Mary said: 'And I was a witness over them while I dwelt amongst them; when You did take me up, You were the Watcher over them, and You are a Witness to all things. If You punish them, they are Your slaves, and if you forgive them, You, only You are the All-Mighty the All-Wise.' "

(5.117-118) Narrated Quaggas, "Those were the apostates who renegade from Islam during the Caliphate of Abu Bakr who fought them".