Writing on his Facebook page, Hamzeh Daoud , a member of Stanford's Students for Justice in Palestine and a former University Senator  declared  "i'm going to physically fight zionists on campus next year". 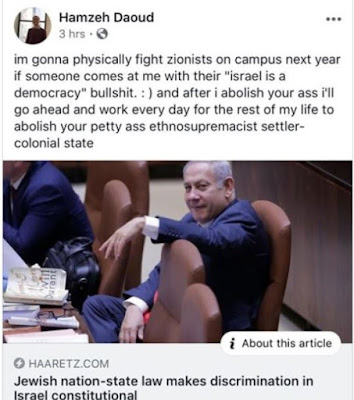 The Stanford College Republicans responded to this call for violence by asking for the University to take disciplinary action against Daoud.

SCR is disgusted by a threat of violence issued by Hamzeh Daoud, a rising junior at Stanford University, toward pro-Israel students. Daoud, who is active in Stanford Students for Justice in Palestine, a former ASSU Undergraduate Senator (Hamzeh Daoud for ASSU Senate), and who will be a Residential Assistant in one of Stanford’s dormitories in the 2018-2019 school year, vowed on his personal Facebook page to “physically fight zionists on campus next year.” Threatening to assault other students who hold a different point of view is anathema to a free society and any kind of education, let alone the operation of the premier research university in the world.

Stanford should take disciplinary action against Mr. Daoud and SCR demands that Stanford terminate Daoud’s position as a Residential Assistant in the Norcliffe dormitory immediately. Mr. Daoud’s statements reveal him to be a danger to the safety of students on Stanford’s campus, and such an individual should never be put in any position of authority over other students, particularly in a dormitory that includes freshmen. Moreover, while we are disturbed by Hamzeh Daoud’s statements, we find it unsurprising that a member of SJP, an organization with financial ties to terrorist affiliates, would issue a call to violence against pro-Israel students.

After his words were exposed by the Campus Republicans, Daoud changed his post 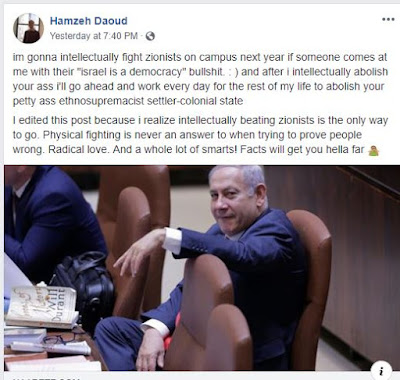 Hamzeh put a smiley face on his threat of physical violence, so you know he's kidding. Maybe. And it was directed towards Zionists, not Jews, so its not a protected class. Maybe.

Have you seen this?
https://www.weeklystandard.com/adam-rubenstein/stanford-student-threatens-to-physically-fight-zionists-on-campus

"According to other Stanford undergraduates, Daoud is an active member in Stanford Students for Justice in Palestine. One student told me that Daoud “has been one of the most aggressive and prolific anti-Israel figures at Stanford. . . . Now, he’s calling for violence against pro-Israel students. He will be an RA in a dormitory next year, and this is unacceptable, as he could quite literally threaten the safety of the students in the dormitory....

A recent Stanford graduate, who was active in the Israel debate while there, commented to me, “Was this kid ever going to beat anyone up? I doubt it. . . . But it just shows how the rhetoric of the campus left has escalated and escalated until they’re literally threatening physical violence against oh, 90 percent of the Jews at the university, just to signal their commitment.”

Well that farcebook posting re-write was really convincing. Just like the trump team cleaning up the mess that was the Helsinki horror show earlier this week.

So, has Stanford expelled him?

If not, then Stanford is indeed the real problem, not it's little neo-nazi Jew-hater student (who Stanford in its wisdom plans to make a dormitory Resident Assistant, which is the craziest thing I've ever heard of).

I suggest checking his room for incendiary kites.