What you aren't hearing about Khan al-Ahmar

Khan al-Ahmar at its core represents a politically motivated Palestinian land grab, and an effort to establish  "facts on the ground".

Thats not what you'll hear in the mainstream media.  Instead you'll hear that Khan al-Ahmar is a  "besieged" or a beleaguered "Bedouin village".

The reality is that Khan al-Ahmar is an illegal encampment, with no electricity, no running water, and no sewage treatment, built on Israeli state land without permits. 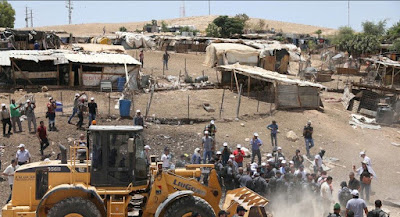 Khan al-Ahmar was built on land that belongs to the State of Israel, in an area under full Israeli administrative and security authority, a critical fact left out of nearly every media  report. 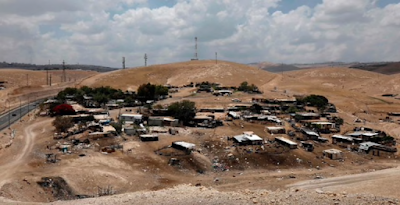 The current residents belong to the Jahalin Bedouin tribe, who were forced out of the Negev after a tribal dispute, in the 1980's.

Aerial photos, originally posted by CAMERA show the comparatively recent settlement of the area, disputing reports that the Beduoin had been there since the establishment of the State of Israel.

In four separate lawsuits spanning a decade, Israel’s highest court has confirmed the illegality of the settlement, but has required the state to “swap” Khan al-Ahmar for alternative property. As a result, the Israeli goverment has created a new neighborhood for the Jahalin families, near Abu Dis. Each family has been offered a plot of land, with water, electricity and access to critical infrastructure- schools, medical clinics and transportation.  Under pressure from the Palestinian authority and their Western enablers, the Beduoin have refused to leave their ramshackle encampment.

The High Court of Justice on has issued a temporary injunction preventing the state from demolishing the encampment. The state has until July 11 to respond.

The LA Times, the Beduoin of Khan Al Ahmar and 'their land'
The Case of the Illegal Bedouin Village of Khan al-Ahmar
Posted by Dusty at 12:10 PM