A call to action, from Anna Baltzer, relaying instructions from her Gaza overlords:


Palestinian organisations in Gaza are calling upon all people of conscience around the world to make posters of the fallen heroes of the recent Great March of Return and plaster these all over your cities and towns, especially opposite Israeli and American embassies. This is an action that will greatly benefit the visibility of our cause!Please send pictures or videos of your action with statement of support for the Right of Return and the Great March of Return to: greatmarchsolidarity@gmail.com Following the media coverage of the massacre that Israel carried out against us on the first day of our march, we have been receiving less and less media coverage.Yet more and more of us are being killed every day. Gaza has been bombarded night and day too....

Help keep the freedom of Palestinians and the right to return in the spotlight!
Signed: Great March of Return-Steering CommitteeThe Palestinian General Federation of Trade Unions (PGFTU)University Teachers’ Association in PalestinePalestinian Students’ Campaign for the Academic Boycott of Israel Al-Aqsa University
One Democratic State Group
Voices Against Israeli Apartheid

The "great march of return" was nothing more than a massive temper tantrum by those middle children of the Arab world, the Palestinians.   Its all about "visibility" and staying "in the spotlight".  Anna and her overlords want to insure you don't get distracted by the myriad of domestic issues. 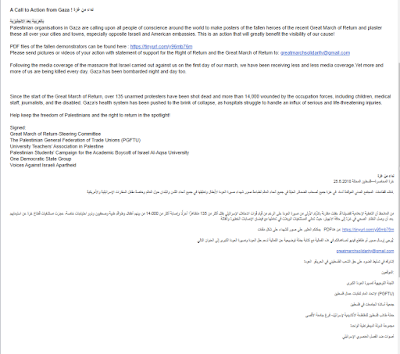 Lets help Anna out.  Zionists are nothing, if not helpful.    Over 80% of those killed in Gaza are identified members of terrorist groups.  Lets show the world who her heroes really are.

For photos of the "civilians" killed in Gaza, start here, or use these:


If you decide to "plaster these all over your cities and towns", send us photos and links, and we'll be sure to post them, to help Anna in her quest to keep Gaza in the spotlight.

And it begins. Thanks to SW at UC Berkeley: 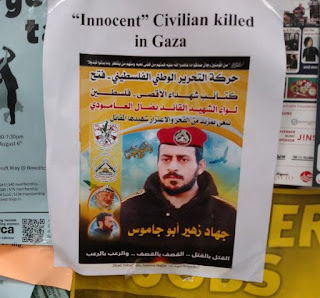 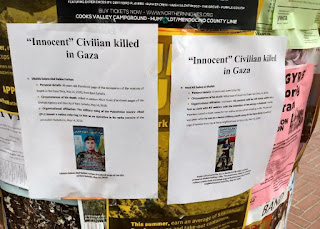 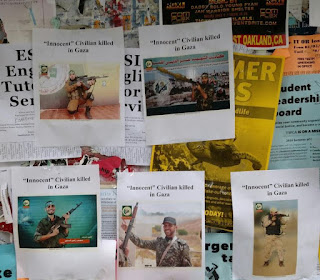 Is Anna Baltzer aka Anna Piller aka Anna Nardie still at it? The current strategy is to replace the "AsaJews" with Palestinians so they can claim their movement is "Palestinian" led.