Louis Farrakhan's vitriolic anti-Semitism has been well documented, by the ADL, and by the Southern Poverty Law Center.  There's nothing more damning than his own words.

“The Jewish media has normalized sexual degeneracy, profanity, and all kinds of sin.”


"The Jews, a small handful, control the movement of this great nation, like a radar controls the movement of a great ship in the waters … the Jews got a stranglehold on the Congress."
Louis Farrakhan, Saviour's Day speech, Chicago, Feb. 25, 1990


"The powerful Jews are my enemy."
Louis Farrakhan  Chicago, February  2018

"White folks are going down. And Satan is going down. And Farrakhan, by God's grace, has pulled the cover off of that Satanic Jew and I'm here to say your time is up, your world is through"


"And you do with me as is written, but remember that I have warned you that Allah will punish you. You are wicked deceivers of the American people. You have sucked their blood. You are not real Jews, those of you that are not real Jews. You are the synagogue of Satan, and you have wrapped your tentacles around the U.S. government, and you are deceiving and sending this nation to hell. But I warn you in the name of Allah, you would be wise to leave me alone. But if you choose to crucify me, know that Allah will crucify you."
Louis Farrakhan, Saviour's Day speech, Chicago, Feb. 25, 1996

"Jews know their wickedness, not just Zionism, which is an outgrowth of Jewish transgression." Louis Farrakhan, Washington D.C. July 1985

"[T]he Jews don't like Farrakhan, so they call me Hitler. Well, that's a good name. Hitler was a very great man. He wasn't a great man for me as a black person, but he was a great German. Now, I'm not proud of Hitler's evils against Jewish people, but that's a matter of record. He raised Germany up from nothing. Well, in a sense you could say there's a similarity in that we are raising our people up from nothing."
— Louis Farrakhan, radio interview, March 11, 1984

"These false Jews promote the filth of Hollywood that is seeding the American people and the people of the world and bringing you down in moral strength. … It's the wicked Jews, the false Jews, that are promoting lesbianism, homosexuality. It's the wicked Jews, false Jews, that make it a crime for you to preach the word of God, then they call you homophobic!"
— Louis Farrakhan, Saviours' Day speech, Feb. 26, 2006

"We can now present to our people and the world a true, undeniable record of the relationship between Blacks and Jews from their own mouths and pens. These scholars, Rabbis and historians [that Nation of Islam researchers studied] have given to us an undeniable record of Jewish anti-Black behavior, starting with the horror of the trans-Atlantic slave trade, plantation slavery, Jim Crow, sharecropping, the labor movement of the North and South, the unions and the misuse of our people that continues to this very moment."
Letter sent by Louis Farrakhan to Jewish leaders and the Southern Poverty Law Center, June 24, 2010.

July 6, 2018 Progressive Zionists of the California Democratic Party is concerned about candidate for Assembly Member in District 63 Maria Estrada’s public support of notorious homophobe and antisemite Louis Farrakhan and her repeated and extreme antisemitism in the guise of “criticism of Israel"...

Estrada saying that she “enjoy[s] listening to Farrakhan’s sermons”, a known and noxious public figure, is a slap in the face to the LGBTQ community and women as well as Jews. Farrakhan’s sermons are littered with homophobia and misogyny. The SPLC and the ADL label him as a hate figure. A truly progressive leader would spurn him from their spaces to make it as safe and inclusive for all identities.

Both the ADL- Los Angeles 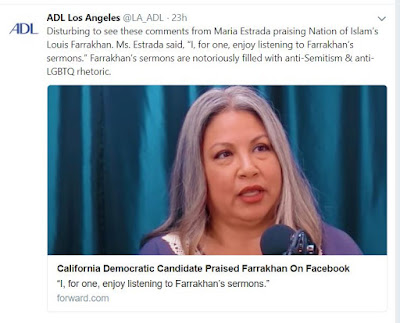 and the National ADL have condemned Estrada's words 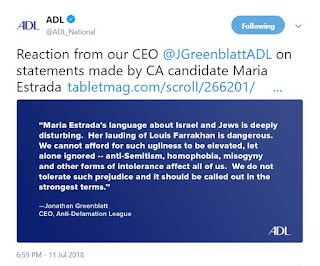 Maria Estrada's embrace of Farrakhan has been covered widely in the press.

Rabbi Abraham Cooper and Dr. Harold Brackman of the Simon Wiesenthal Center, writing in the Jewish Journal note how "bigots from the far Left and the far Right" are "wending their way into the mainstream of our society."

Yair Rosenberg, writing in Tablet Magazine stated:
Maria Estrada promotes Louis Farrakhan and attacked a Jewish politician over his religion. She also claims she’s just ‘anti-Zionist.’
Combating this dangerous dynamic is a challenge that progressives and the Democratic Party must meet. If both groups intend to be credible voices on antisemitism and on Israel, they’re going to need to learn to spot bad actors like Estrada who use Israel as an excuse for their unreconstructed Jew hatred. Identifying and casting out these bigots will not only marginalize the bigotry, but it will also open up a constructive space for criticizing Israel that isn’t tainted by antisemitism.

From the Times of Israel:
Progressive Zionists of the California Democratic Party calls on Maria Estrada to resign and apologize for 'blatant anti-Semitism' which 'disqualifies her from public office'

From the Jerusalem Post:
Maria Estrada, a candidate for California’s District 63 representing the southeast suburbs of Los Angeles, offered her support for anti-Semitic Nation of Islam leader Louis Farrakhan.

The inclusion of Maria Estrada as a Democratic Candidate for California State Assembly in District 63 is nothing less than the mainstreaming of anti-Semitism in the Democratic party.  Its time for the DNC to denounce and distance themselves from Estrada.
Posted by Dusty at 9:58 PM