No Solidarity in Oakland, as protesters bully Longshoremen

From Emunah,  who made a guest appearance at the Oakland waterfront yesterday afternoon, to bear witness to the latest day of rage against the Zim lines

It did not compute. There were only two-dozen protesters at the Oakland docks for the September 27th  morning protest, yet activists claimed  their picket line was honored "in solidarity" by the ILWU 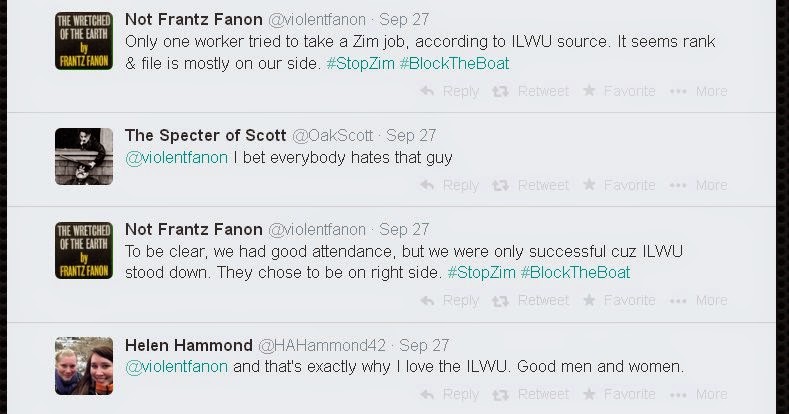 I decided to see for myself, arriving at the Oakland docks in time for the evening shift. There were only 6 people lolling around at 4:30, so I drove around a bit. The  whole area is a red zone- with no parking. The nearest legitimate parking was nearly a mile a way.  But it was obvious  that the protesters were ignoring the red zones, and as more and more came and parked in the red, I finally did the same. 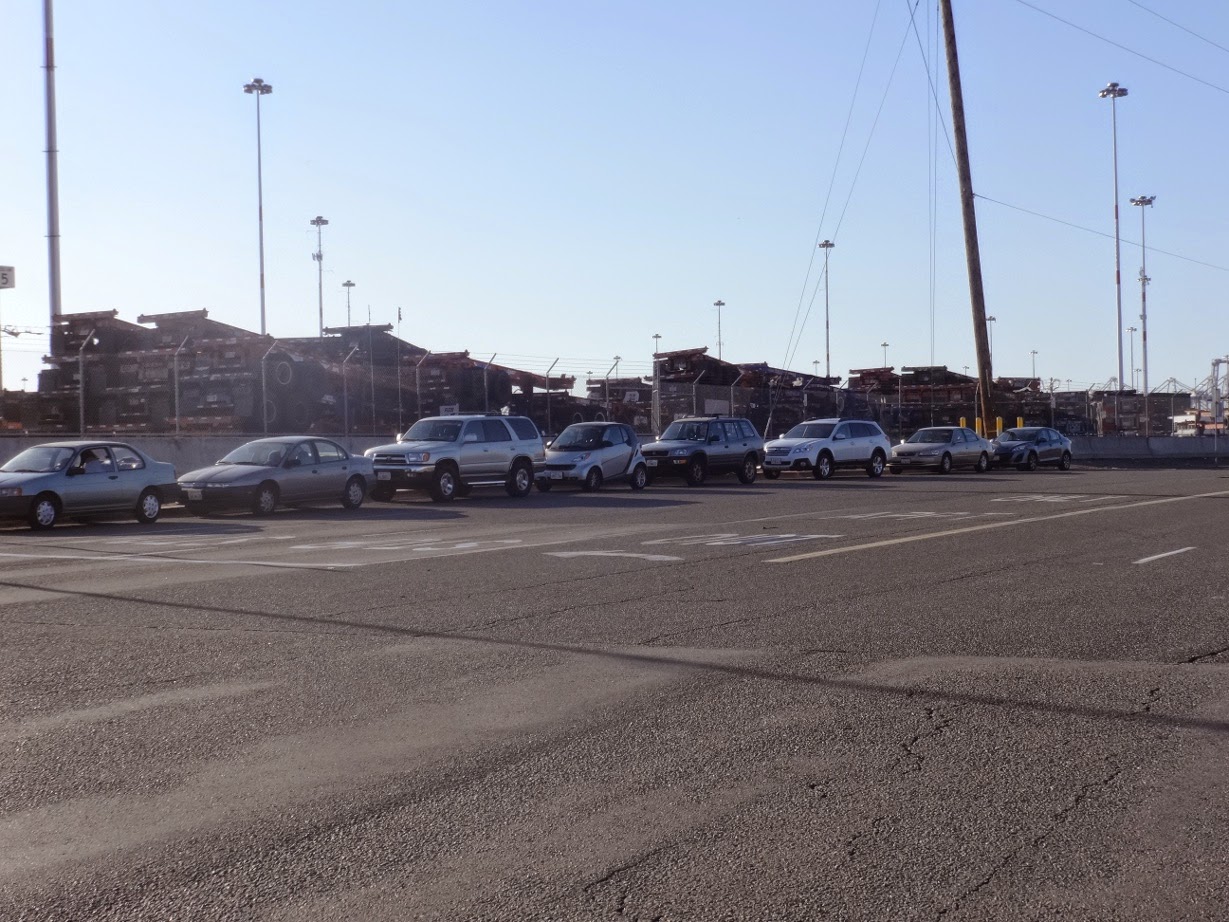 Jack Heyman (a retired longshoreman from the ILWU, and an organizer /instigator of block the boat campaign) came up to me, oblivious to the fact that I was holding an Israeli flag and an "Israel wants peace sign" and asked me to use my car to block the ILWU parking lot entrance.

I couldn't help but wonder, if the union stands in "solidarity" with your cause,  why is it necessary to block their egress?

Come, on, really?  Who graffitis their own van? 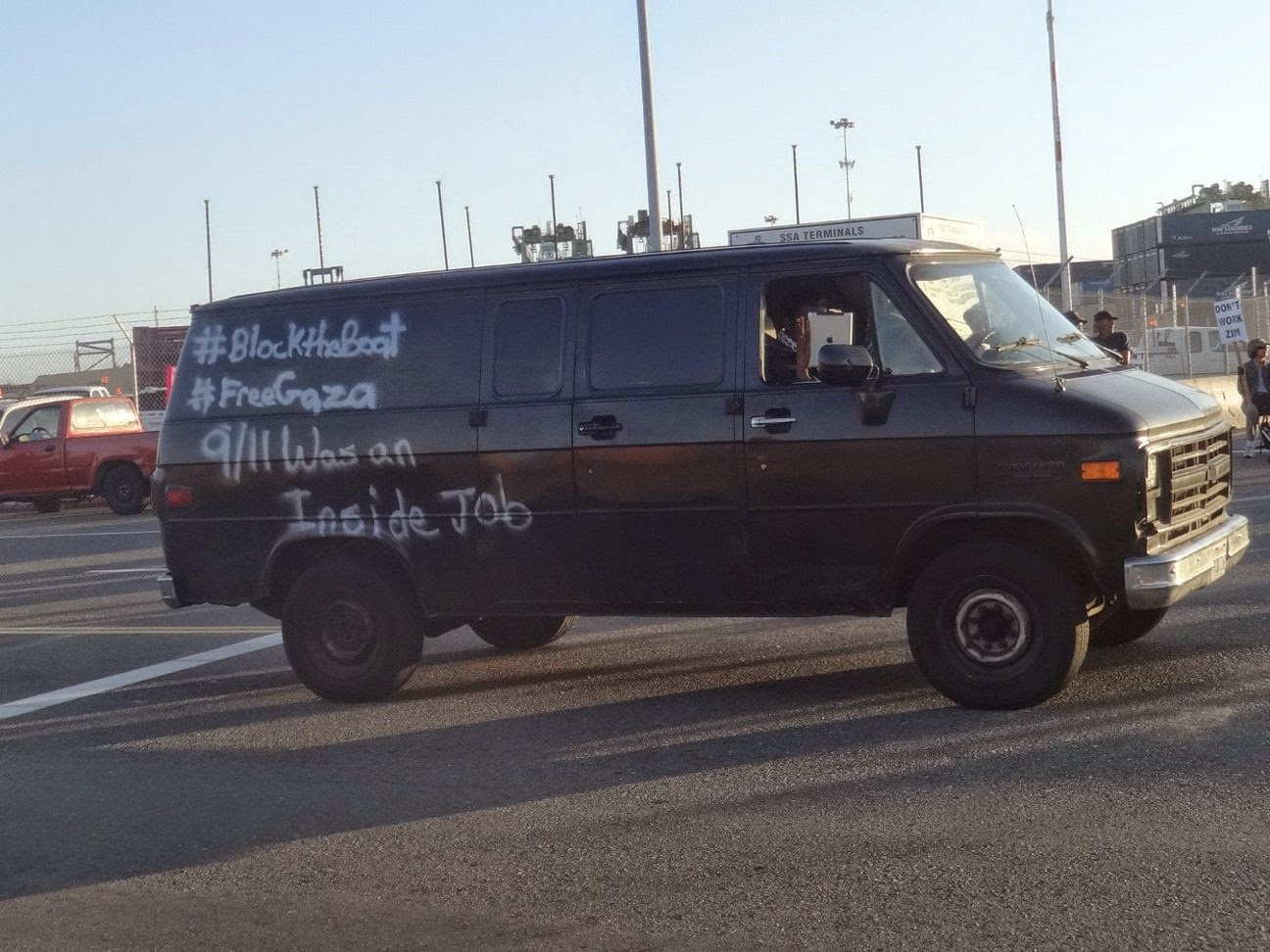 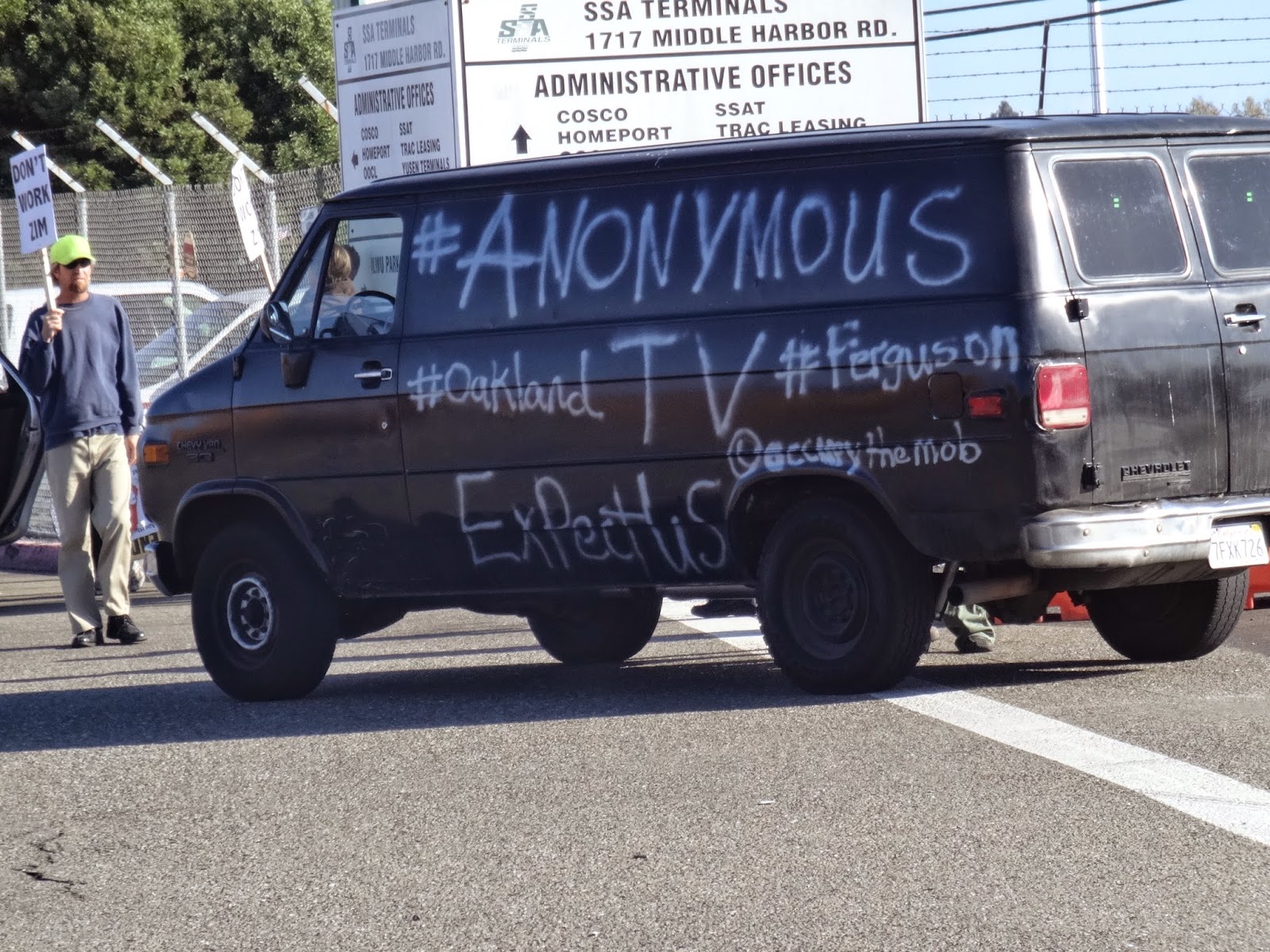 Oakland  anti-Israel activist  and psychedelic relic Madrone Mofeeta  (aka Madrone Jack), made a dramatic display of photographing my  license plates, while hissing "Zionist filth" at me. 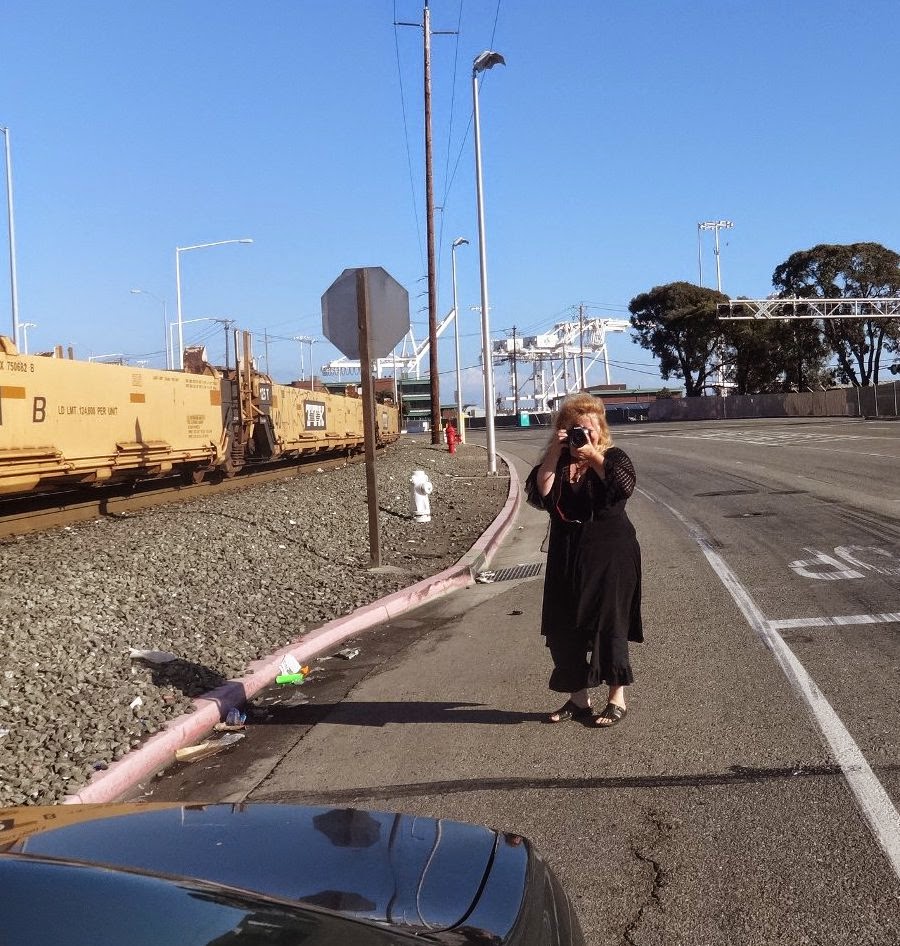 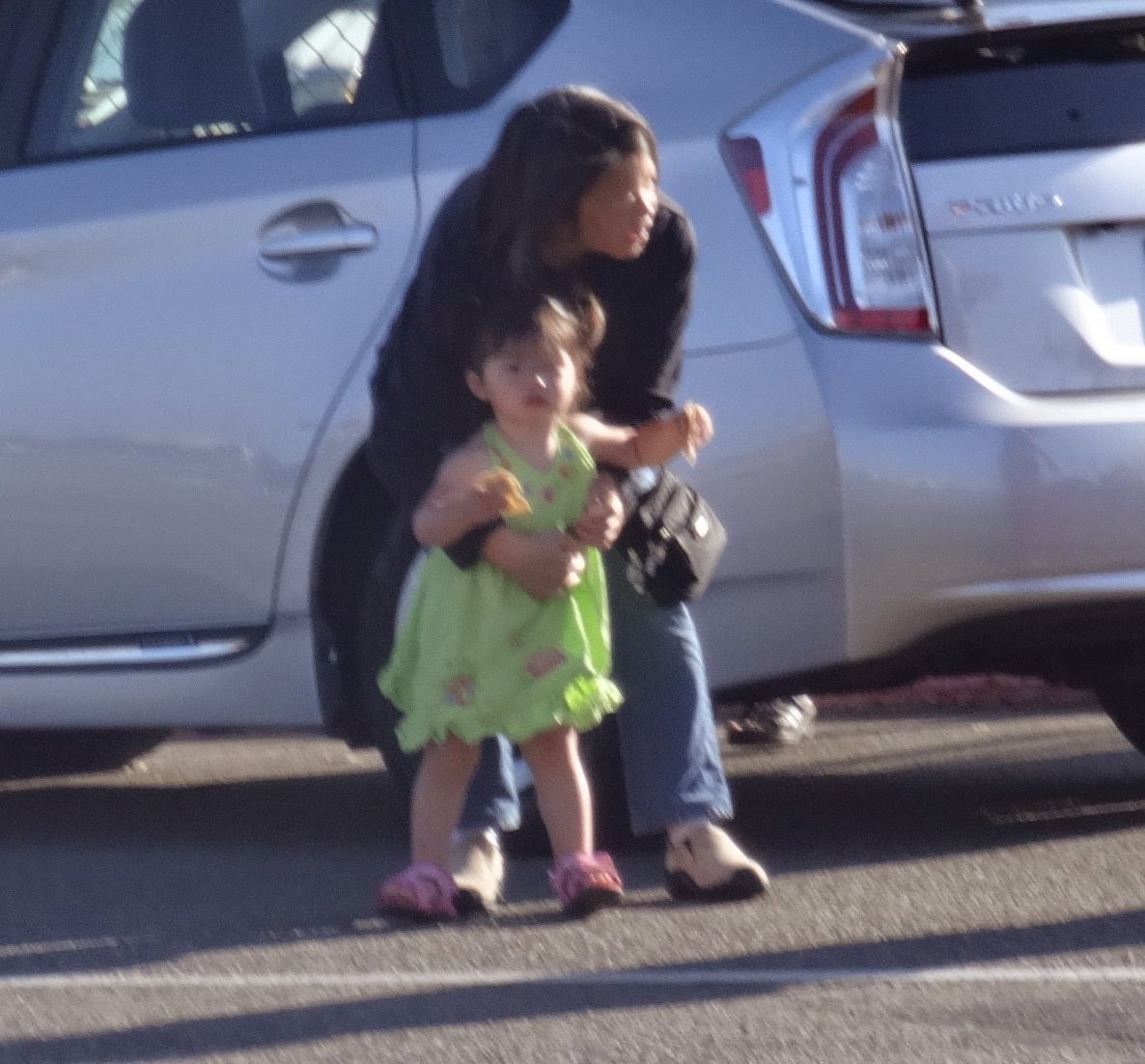 Their signage was the usual cliches of eternal victimhood, finger-pointing, and down-right anti-Semitism 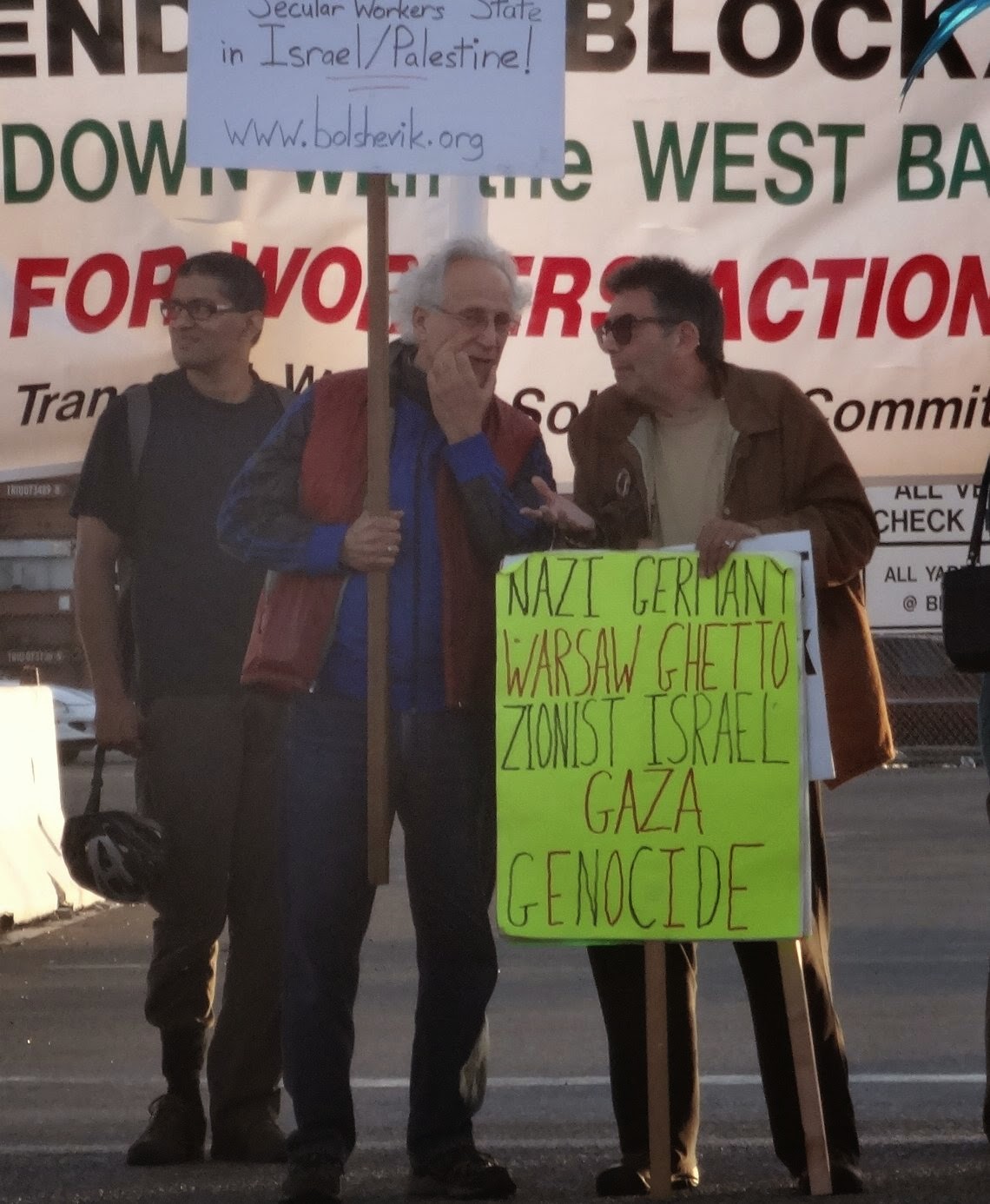 By 6 , there were about 60 people present. Jack  Heyman  was receiving information directly from the union hall and was orchestrating the protest.  He claimed  the union told the port they would guarantee the ship would be unloaded if there was no police presence.  There was no police presence. The union had put in a work order for the evening, and the group could vote on whether or not they wanted to stay, or to attempt to block the  workers.  He told me I wasn't allowed to vote. : - (  There was no democracy on the streets on Oakland that evening.


The group voted to stay and prevent the union workers from coming in- Jack spread people out between the 5 gates. Describing their numbers as "thin",  Jack urged the protesters to call their friends and bring in reinforcements.

Cars were physically blocked and prevented from coming to work. The drivers were photographed, in a crude attempt to intimidate them.  ILWU workers  became increasingly angry. 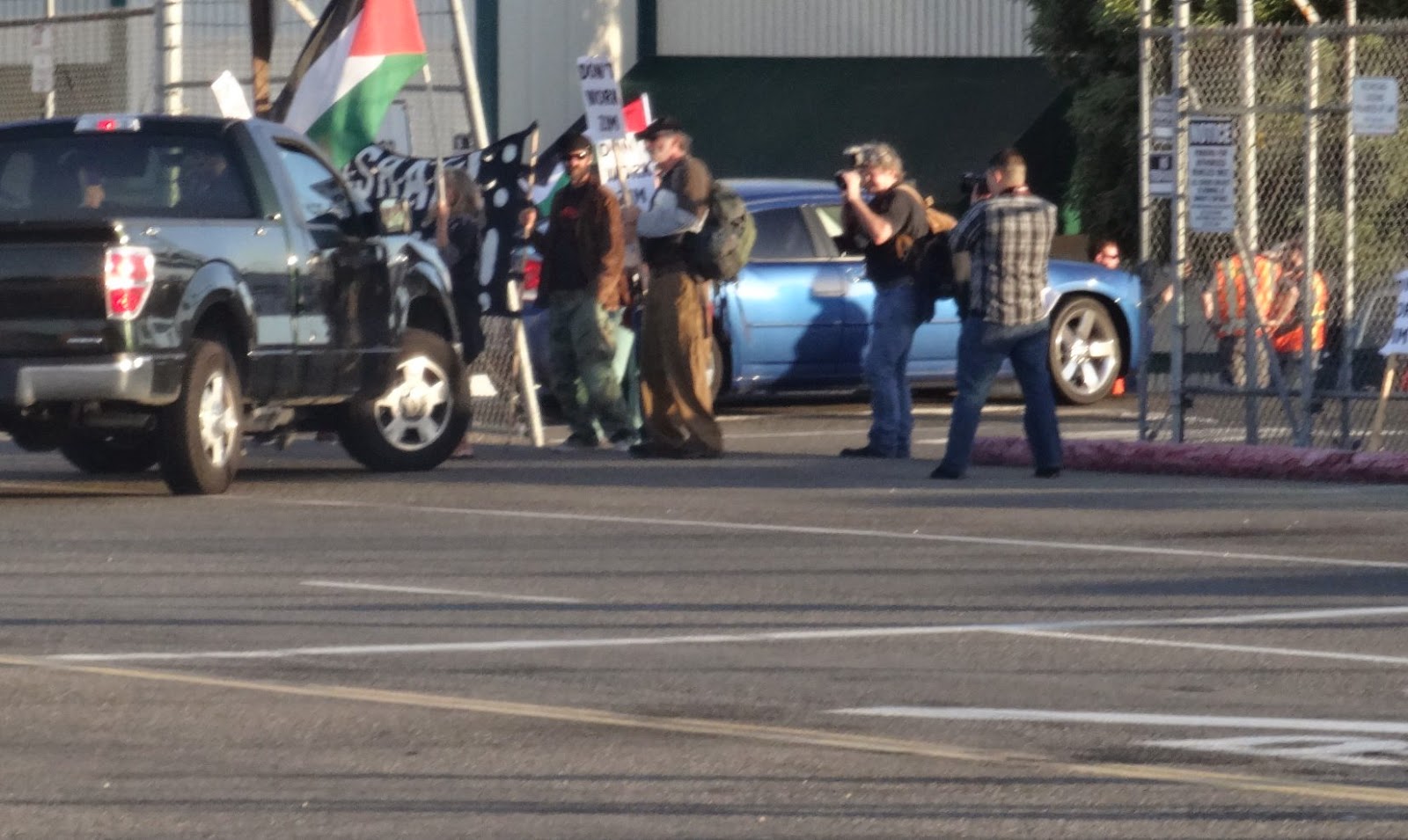 I spoke to a few of the longshoremen who were clueless about the politics. Not pro, not con, just completed baffled  as to why they  were being dragged into this.

In spite of the intimidation and the  physical obstruction of workers,  anti-Israel activists  claimed  "solidarity". Their "picket" was "honored".

I recognize solidarity when I see it.  An engineer operating on the tracks behind me stopped his engine, and thanked me profusely for being there.

On his second pass for the evening, he brought me cold water. 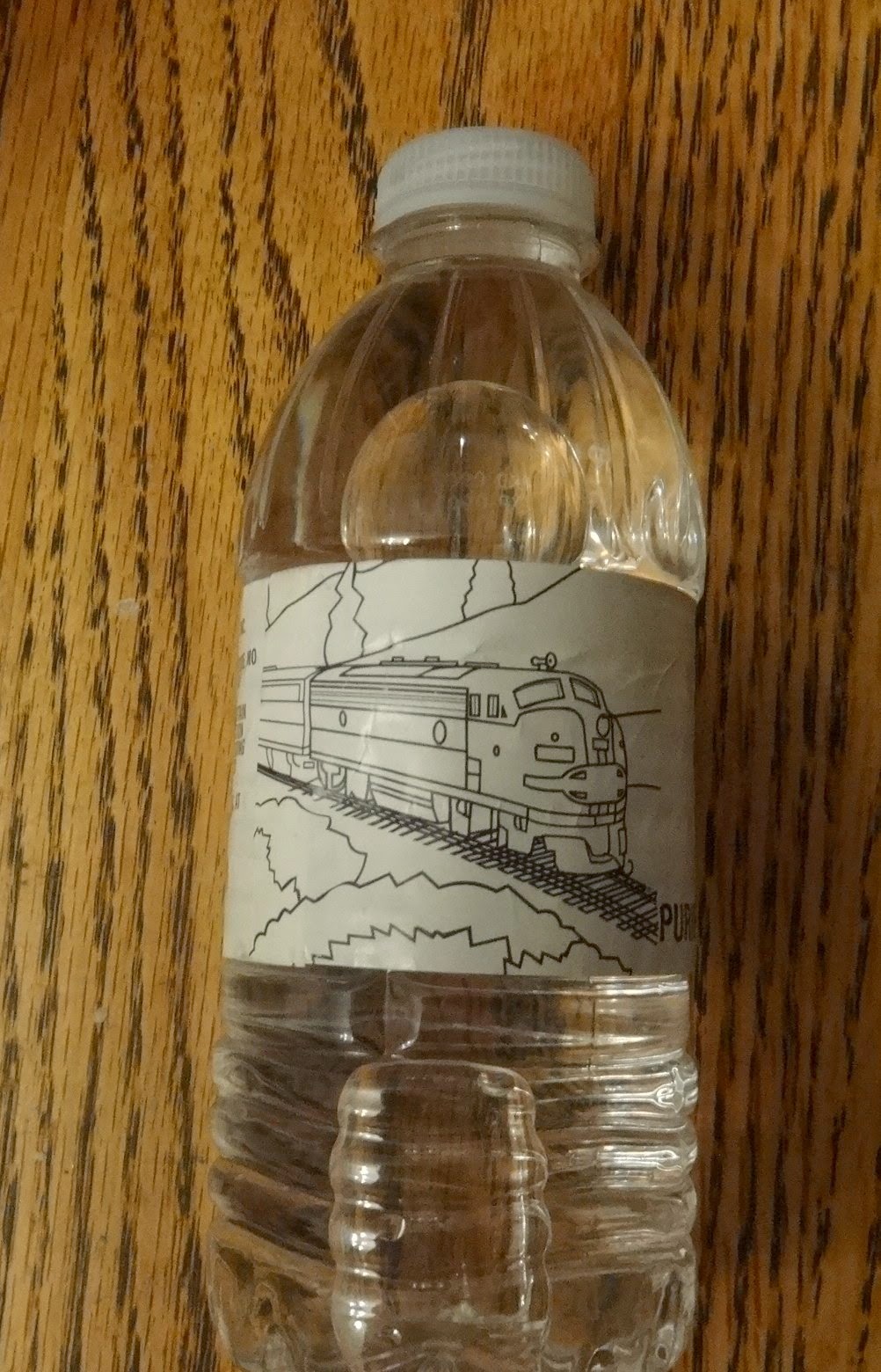 He stopped by again when his shift was over, bringing more water, and again effusively thanking me.

The Zim ship left port without being unloaded. The Port of Oakland has proven its impotence, and its unreliability as a place to do business.

Who will pay the ultimate cost of this cheap symbolic "victory" ?  The port will suffer for this. And the thousands of people who rely on the port for their livelihood will suffer.  Ultimately, Oakland will suffer.

this is even more pathetic then the way Oakland handled the occupiers at Frank Ogawa Plaza. Oakland is in desperate need of a new mayor!

Anti-Jewish fervor is loud and mean in Santa Cruz, too.

Israel must be held accountable for its actions. Blindly supporting Israel as you do will just make it more of a world outcast than it already is!!!

Obviously censorship on this site.

Without "censorship" on this site, the comment section fills up with offers to "enlarge my manhood'. So, yes, expect censorship. If you'd like information on enlarging YOUR manhood, I assume you'll be able to locate sources on your own

I don't understand how this is possible. I know Oakland has a police department. Why didn't anyone call the police and ask to have the trespassers removed?

The Port of Oakland includes Oakland International Airport, and I'm pretty sure if anyone trespassed in an area around FedEx planes, for instance, they'd be up for federal prison. The shipping area may have similar federal protections. I remember, during a big protest against the Iraq war, people interfering with shipping operations were dealt with aggressively, and some went to jail.

So, rather than focusing on a few losers, the real question is, why is anarchy allowed in a sensitive, protected area? Who in the police department and the city government, the longshoremen's union, etc., have decided to play along with this?

And those people should be exposed and possibly sued for interference with business relations, with added penalties for racism and racketeering.

Many people are asking the same questions. If you want to feel like you are doing something, write or email Barbara Lee (510) 763-0370 (this is her district, after all). Ask her-why do a little over 2 dozen protesters, representing a special political interest get to conduct what amounts to economic terrorism and shut down a port? Tell her its bad for the Port. Tell her its bad for Oakland. She doesn't care and she doesn't want to get involved, but if she hears about this enough from her constituency, well, maybe miracles can happen?

Your threats against the people of the US expose your cowardice. You may murder women and children at home but americans fight back. Leave the US your blood money isnt needed in Oakland or anywhere else.

Yes, the block the boat activists were essentially cowards and ultimately Americans and Israel will fight back and they will prevail . Democracies must stand united against terror

It is sad that the Israeli/Palestine mistake of 1948 continues to plague the US. Everything Marshall was afraid of has come to pass. Even worse, the corporate controlled media in the US only tells the side of Israel with the exception of Democracy Now. Since US citizens are so poorly educated and lack knowledge about their history and the history of this conflict they, like the sheep they become at times, bleat the same pro-Israel slogans that have been slammed into their heads through the media. Israel deserves protection and they have it with over 400 nukes that the CIA claims they have had since 2012. Why they are #1 on the foreign welfare program of the US is a testament to the lack of backbone our bought and paid for Congress has. We need the 5 billion plus here at home fixing infrastructure but instead we feed the war machine in Israel who has given us what? False info about WMD's and Iraq? The near sinking of the USS Liberty after 2 hours of attack. Stealing of defense secrets by the Pollards and then denying they were spies until a few years ago (and every year N-yahu asks for his release since they made him a citizen). Even Fox news, an avid Israel first media giant, ran a 4 part series about Israeli spying in the US increasing after 9/11......Israel needs to be on their own now in order to learn how to get along with the other bullies in the ME......They can handle themselves without us..........

Oakland definitely needs a few dozen tough Jewish activists who are willing to up the ante on this. The block the boat idiots will quickly fade away if they're faced with intense confrontation. My bet is the rank and file union members would cheer anyone who supported their right to make a living doing their jobs.

These are not the longshoremen I used to know. When did they become a bunch of wimps?

Why is the US giving money to Pal-e-SWINE after the assassination of US Senator Robert F. Kennedy by a Pal-e-SWINIAN in 1968?

Follow Madrone Jack on Instagram @MadroneJack
Her work is unforgettable. And by unforgettable, I mean hideous and nightmarish. She thinks she's an artist, byw.