Kayla Starr of Code Pink gets it wrong again

Kayla Starr of Code Pink published an article "What makes right wing U.S. Jews so violent?" that's been getting spammed across the Web.

“Never have I felt so frightened as I do when encountering the angry, violent rhetoric and behaviors Jewish Zionist zealots regularly use against non-violent protesters in the U.S. I have seen them use the Israeli flag poles to strike non-violent old ladies, knock cell phones out of hands, push and batter protesters. Are these my people?”

Its strange. Kayla is local, and has likely been to the same protests as I have.

Was Kayla at this event, when hundreds of anti-Israel protesters, egged on by their leadership, crashed through the police barricades and nearly lynched a handful of tired frightened middle aged “ zealots” ?

"I became active in supporting the rights of the Palestinians after the siege of Gaza, two and half years ago. I have attended rallies, marches, and teach-ins. The Jewish right wingers who show up at these events scare me more than anyone I have encountered over many decades of activism. I have marched to protest the wars, for human rights and health care, against nuclear power and weapons, for climate justice and various other progressive causes for the last 30-some years."

Just wondering Kayla- how can you tell, just by looking at someone, that they’re Jewish?

Did Kayla ever meet this charmer? 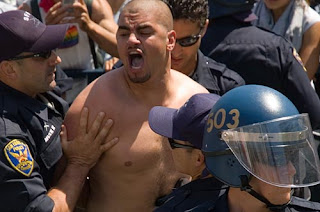 He showed up at a San Francisco "peace rally" with two cans of "non-violent resistance" gasoline. He stole a flag from a pro-Israel activist and set it on fire. He was arrested, and spent 5 days in jail. The jihadi was fined $100 plus $25 costs; he would receive an additional one year in the county jail if he violated probation. The DA specifically added a clause prohibiting him from interfering in any "lawful political activity"; the judge also added one prohibiting him from burning any flag in public or disrupting political rallies. Crime just doesn't pay. 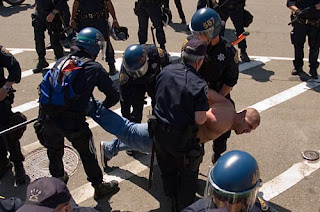 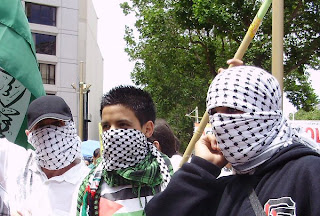 Have you realized that the "Scary Jews" aren't the ones wearing shirts calling for "War forever"? 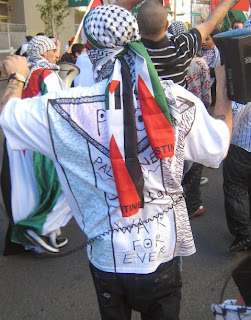 Haven't you realized Kayla, that the we aren't the ones showing up at peace rallies with signs that say "Kill Jews" 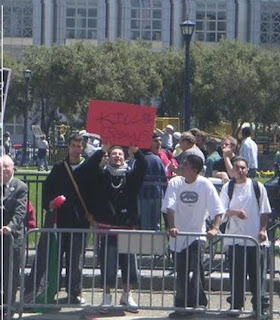 Take off the blinders of your personal victimhood, Kayla Starr and give a good look around. You might just be surprised.
Posted by Dusty at 8:35 PM

From Kayla's linked in profile

Lordy Lordy Lordy, she must be a native Californian. And she's a massage therapist. Need I say more?

Good response, Dusty. I was battered by the Jew-haters because I tried to use my camera. And I saw you assaulted a few weeks ago by another one. Funny how they hide their faces and we don't.

No offense intended, but every time I remember that bunch of violent protestors, and their stupid Berkeleyite earthmom apologist babysitters, I really do think that I've got more balls than the entire Northern California liberal mob. Darn close to an orgasm. Oh yes.

Bunch a wussy softy spunkless wonders. No backbone at all.

Five of us. Five hundred of them. They fouled their keffiyeh-patterned panties. Worthy heirs of Yassir-the-degenerate-Arafat.

Ah, memories of almost being torn limb from limb by wanna-be jihadi kids - MANY of them.