From IsraellyCool- Have authorities identified the Bulgarian suicide bomber? 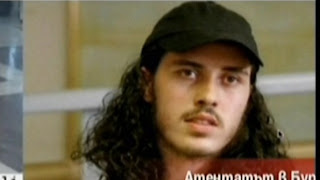 From our friends at Israellycool

Bulgarian media on Thursday named the suicide bomber who blew up a bus full of Israeli tourists, killing five Israelis and a local bus driver, in the Black Sea resort of Burgas on Wednesday as Mehdi Ghezali.

There was no independent confirmation of the veracity of the information. The reports surfaced soon after Israel’s Prime Minister Benjamin Netanyahu had publicly accused Hezbollah, directed by Iran, of responsibility for the bombing. The Prime Minister’s Office made no comment on the reports.

The Bulgarian reports, rapidly picked up by Hebrew media, posited various versions of how the bomber had detonated the bomb, including the suggestion that the bomber had not intended to die in the blast, but may have wanted to place the bomb on the bus and flee.

Ghezali was reportedly a Swedish citizen, with Algerian and Finnish origins. He had been held at the US’s Guantanamo Bay detainment camp on Cuba from 2002 to 2004, having previously studied at a Muslim religious school and mosque in Britain, and traveled to Saudi Arabia, Afghanistan, and Pakistan.

Following a lobbying effort by Swedish prime minister Göran Persson, Guantanamo authorities recommended Ghezali be transferred to another country for continued detainment, and he was handed over to Swedish authorities in 2004. The Swedish government did not press charges.

He was also reportedly among 12 foreigners captured trying to cross into Afghanistan in 2009.

This information has NOT been confirmed.

UPDATE
From The Times of Israel:

The five fatalities from the attack were set to be flown home on Thursday evening. A ceremony was being planned for their arrival, with Tourism Minister Stas Misezhnikov set to represent the government.

Channel 2 reported that Menashe and Kolengi were childhood friends who traveled to Bulgaria with their wives, who were both injured in the attack. The Kolengis had celebrated the birth of their first daughter four months ago and planned a long weekend away without the child, who was left in the care of her grandparents.
Galit Kolengi was seriously injured in the explosion that killed her husband and and was to be flown back to Israel Thursday night. Natalie Menashe was lightly injured in the blast.

Harush and Priess were both from Acre. When news of the attack reached the Harush home, family members hoped for the best, but their hopes were dashed when they were asked by authorities to provide DNA samples.

In the hours following the explosion Itzik Shriki, who was lightly injured in the attack, searched for his wife until the terrible truth of her fate became clear. She was taken to a hospital in Sofia, without him being told. According to Channel 2, the couple had recently succeeded in becoming expectant parents after several years of frustrated attempts.

“Two of them have gone, she and her baby,” wailed Yael Mored, Shriki’s sister. “They just went for three days of holiday and now she will come back in a coffin.”
Itzik Kolengi was to be buried in Petah Tikva’s Segula cemetery on Friday at 10.30. Amir Menashe was to be buried in the same cemetery an hour later. 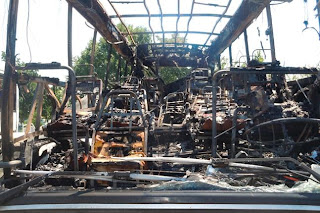 Aftermath of the Burgas terror bombing
Posted by Dusty at 10:11 AM