Buddhists and Muslims in conflict in Burma? Burn an American flag in Gaza "We stand here in front of the UN headquarters which did nothing to what the Muslims are being exposed to," a spokesman of the protesters said.

"We stand in Palestine in support of the Muslims of whom more than 2,000 were killed and more than 90,000 were displaced while the media is busy with other issues."

He called on the international community to stop what he called the “genocide” against Muslims, urging Arab and Muslim leaders to condemn the crimes.

Tension between the mostly stateless Rohingya Muslims and majority Buddhists flared into violence that killed at least 80 people last month.

There has been an upsurge in hate speech on the web directed against Buddhists, including this baffling piece from Pakistan. 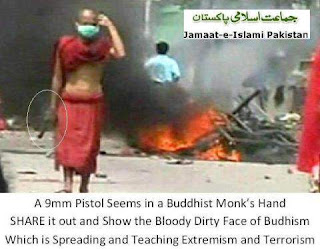 are you sure it's a monk?
it might be a terrorist dressing like a monk, stop this war, don't make it worst