While its clearly too early to know for certain what caused the explosion (I suppose its possible that parked buses in Bulgaria routinely explode), I can't help but remember other bus attacks targeting Israelis. 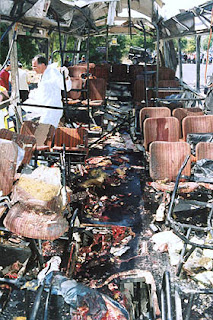 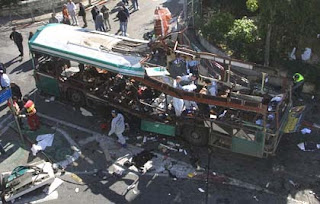 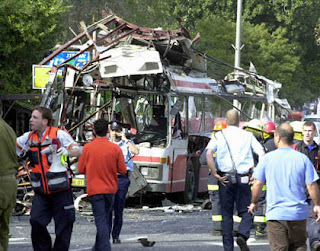 Today, incidently, is the 18th anniversary of Iran-sponsored bombing of Jewish center in Argentina

Three Israelis were killed and many injured when a suicide bomber blew up an Israeli tourist bus at the airport of the Bulgarian city of Burgas on Wednesday, the 18th anniversary of the Iran-sponsored attack on the AMIA Jewish center in Buenos Aires, Argentina.

The bus was carrying Israeli tourists who landed in Bulgaria at a 4:45 p.m, and was meant to take them to Bulgaria's Sunny Beach resort. Two adjacent buses were also damaged in the blast.

More details as they become available

from Haaretz
The bombing in Bulgaria on Wednesday was committed by a suicide bomber and not by a charge planted in the bus beforehand as believed at first, a senior official in the Israeli Foreign Ministry told Haaretz on Thursday.

The estimate was bolstered by comments made by Bulgarian Prime Minister Boyko Metodiev Borisov as saying that chances were that the bombing was perpetrated by a suicide bomber.

Eight people were killed in the bombing, six of them Israeli tourists, one of them the Bulgarian bus driver, with authorities estimating that the eighth may be the terrorist who perpetrated the attack. An additional 32 Israelis were wounded in the attack.

The Bulgarian police said that footage from airport security cameras captured the suspect roaming the airport for at least one hour, the Bulgarian news agency Novinite reported. According to the report he was a long-haired Caucasian in sportswear.

The body suspected as belonging to the terrorist had a U.S. passport issued in Michigan – apparently fake.
Posted by Dusty at 9:39 AM