Mapping Judaism : a fascinating chart from the Economist

Not only is Israel the spiritual center of the Jewish people, it is now the geographic center as well.

From the Economist (h/t Bob)

JUDAISM is enjoying an unexpected revival, according to a special report to be published in this week’s Economist. The map and chart below show where the biggest Jewish populations live and how this has changed over the past century. In 1939, Jews numbered 16.5m people, up from 10.6m in 1900. By the end of the second world war, the Nazis had wiped out one-third of them, sweeping away a thousand years of Jewish civilisation in central and eastern Europe. The death toll might have been even higher, but a flurry of pogroms that started 60 years earlier across the then-tsarist empire had sent waves of Jewish emigrants westward. By the time Hitler struck, some 6m Jews were safe in North and South America and in Britain, with 3m more living in the Soviet Union. From 1948, most of the Jews of north Africa and the Levant emigrated. The break-up of the Soviet Union brought the latest big wave of Jewish migration to Israel in the early 1990s. 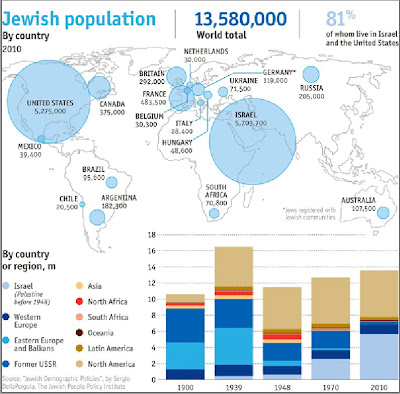