A suprising find at the Huffington post, written by Ron Prosor, Israel's Ambassador to the United Nations.

This month the United Nations marks World Refugee Day, a star-studded, multimedia campaign to raise awareness about the plight of refugees. Celebrities like Angelina Jolie have cut video spots that will be broadcast on television and spread on social media. Millions will participate in events spanning five continents, from concerts in London to a film festival in Beirut to a bike race in Ecuador. Yet mention of one group of refugees will be noticeably absent from any of these activities: the 850,000 Jews expelled from Arab countries during the past six decades. Their history remains one of the 20th century's greatest untold stories.

At the end of World War II, 850,000 Jews lived in Arab countries. Just 8,500 remain today. Their departure was no accident. After Arab leaders failed to annihilate Israel militarily in 1948, they launched a war of terror, incitement, and expulsion to decimate their own ancient Jewish communities.

In Iraq Jewish businessman Shafiq Adas, then the country's wealthiest citizen, was immediately arrested on trumped-up charges and publicly lynched. This was followed by bombings targeting Jewish institutions, arbitrary arrests of Jewish leaders, and massive government seizures of property. Within years virtually all of Iraq's 2,500-year-old Jewish community had fled, emptying the country of many of its greatest artists, musicians, and businessmen.

Similar scenes played out across the region, from Egypt to Syria to Libya to Yemen. State-sanctioned pogroms descended on Jewish neighborhoods, killing innocents and destroying ancient synagogues and Jewish cemeteries. New, draconian laws prevented Jews from public worship, forced them to carry Jewish identity cards, and seized billions of dollars in their property and assets. The total area of land confiscated from Jews in Arab countries amounts to nearly 40,000 square miles -- about five times the size of Israel's entire land mass.

The vast majority of these Jewish refugees came to Israel, nearly doubling its population. Most entered the Land of Milk and Honey with no milk, no honey, and no money. They were embraced with full citizenship rights and ambitious programs for integration, rising to the highest levels of society.

The years have passed, but the injustice inflicted upon these Jewish refugees continues. Many around the world have remained silent and complicit as Arab governments have sought to erase all memory of their stories.

Nowhere is this revisionist history clearer than in the halls of the United Nations. Year after year Palestinian refugees attract more attention and resources at the U.N. than Britney Spears at a paparazzi convention, yet not a single syllable about the Jewish refugees expelled from Arab countries can be found in any of the 1,088 U.N. resolutions on the Middle East or the 172 U.N. resolutions dedicated to Palestinian refugees.

While Arab leaders have found a refuge from reality at the U.N., they have been unable to outrun the consequences of religious and sectarian persecution, incitement, and violence at home. In the rubble of Aleppo's former Jewish neighborhoods, Assad's Allawite-led regime continues to brutally suppress Syria's Sunni-led uprising. In Egypt mobs burn Coptic Christian churches in the same way that they attacked synagogues years ago. In Baghdad, where Jews once constituted a third of the population, Sunnis and Shiites remain pitted against each other after years of bloodshed.

Forging a peaceful future in the Middle East will require Arab governments to finally learn the lessons of their pasts. They must build inclusive societies that protect minorities and offer everyone a seat at the decision-making table.

The first steps toward true pluralism will come when Arab countries acknowledge the history of persecution and intolerance in their own lands. They should start by unearthing the 850,000 untold stories of Jews ripped from their ancient homes.

The historic Jewish presence in the Arab World must be recognized. The grave injustices inflicted upon them must be acknowledged. The crimes committed against them must be rectified. 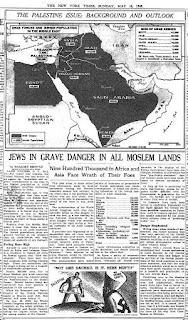 For more information on the forgotten refugees of the Middle east, see

JIMENA: Jews Indigenous to the Middle east and North Africa

The always excellent Point of No Return blog

Justice for Jews from Arab lands
Posted by Dusty at 3:48 PM