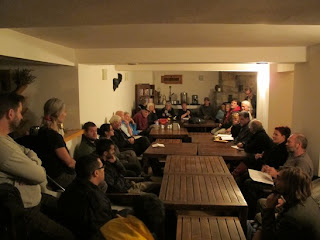 Freedom Waves Blockade runners in meeting before departure. Steering committee is telling delegates that the Turks are only allowing 12 people to get on board.

Was it Einstein who said "Insanity is doing the same thing over and over and expecting a different result?"

27 activists from 9 countries, including America, Canada, Denmark, Belgium, Germany and Australia, alongside a Palestinian Haifa, in a broad-based international movement to break Israel’s illegal and immoral suffocation of the 1.6 million inhabitants of the Gaza Strip. The Irish yacht Saoirse (Freedom), which carries 15 activists, and the Canadian boat Tahrir (Liberation), which holds 12, will attempt to carry $30,000 in medical supplies beyond the Israeli blockade later this week. ‘Freedom Waves for Gaza’ is the 11th attempt by international activists to deliver humanitarian aid through the Israeli blockade of Gaza since 2008.

I wonder if the newest flotilla members are planning on staying in the 5 star Al Mashtal resort, in Gaza. They'll be in good company- surrounded by the murderers and released convicts from the Gilad Shalit prisoner exchange. The all you can eat breakfast buffet at the Al-Mashtal looks lovely.

More details as they are available.

Whining from an ISM press release
"The most recent figures published by the UN and international humanitarian and human rights organizations confirm that roughly 75 – 80% of the population rely on international aid in order to survive; 65% live below the poverty line; 52% are food insecure; approximately 40% are unemployed; there are no building materials for much-needed schools and hospitals; 90 – 95% of the drinking water is contaminated and unfit for consumption; seriously ill patients cannot get access to the specialist treatment that would potentially save their lives; and children are suffering untreated post-traumatic stress as a result of the white phosphorous shells used illegally in Israel’s invasion in January 2009."

Context is everything, Ben Lober.

According to the United Nations Human Development Index, a comparative measure of life expectancy, literacy, education and standards of living for countries worldwide, the Palestinian territories are smack dab in the middle of the pack, with a higher standard of living than Bolivia, Paraguay, the Philippines, the Maldives, and even their neighbors in Egypt.

No building supplies for hospitals or schools, Ben?

Goods delivered to the Gaza Strip in September alone:
4945 truckloads (136,785 tons) of commercial goods were delivered through Kerem Shalom Crossing, including:

Maybe then Gaza should use their construction materials for infrastructure,rather than 5 star hotels and waterparks 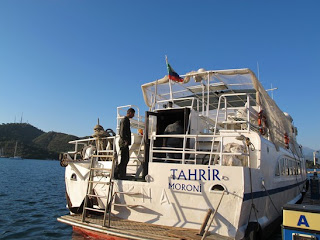 "Sailing under the flag of the Comoros Islands, the Tahrir is carrying six activists, a captain and five journalists.

The Saoirse - sailing under the US flag - has 12 Irish nationals on board, none of whom are journalists.

David Heap, a member of the steering committee on board the Tahrir, told Al Jazeera that the activists chose to leave from Fethiye because of the strained relations between Turkey and Israel.

"The Turkish government has been creating more distance from Israel diplomatically and we know there is support from Turkish society for what we are doing.

"Our judgment was that the Turkish state would not interfere with us if we didn’t make too much of a public issue of our plan to depart from there," Heap told Al Jazeera."
Posted by Dusty at 11:52 AM