The Rise and free-fall of STOP AIPAC

The demise of yet another anti-Israel organization:

From Jim Harris of Stop AIPAC

When the website StopAIPAC.org started over 5 years ago, we had hopes to inspire people to unite in protest against AIPAC, a lobby for occupation and war. Since that time, there have dozens of protests around the country, in city after city, as aipac kept selling its product , an apartheid system that could only be promoted with fear and and the spread of hatred (in the form of Islamophobia), and protected by massive military expenditures. We witnessed the emergence of Move Over Aipac and its protest of aipac at its annual Policy Conference in DC. That was a modest success, and it remains to be seen if the next Policy Conference in March will be confronted by something bigger, our fondest hope.

What is certain is that due to many personal reasons i no longer wish to be doing this newsletter, or updating the website. This is the last newsletter you will be receiving, and the website will fade away soon also. I hope many others continue to fight aipac and work for justice and peace in the Middle East, and fight the threat of a US and/or Israeli war against Iran, which could easily turn into the greatest catastrophe of our era.

I am personally thankful for those who sent words and even donations of support. We hope you find other organizations to support (like Move Over Aipac or The US Campaign to End the Israeli Occupation ) We hope that the protests continue to grow and that people will continue to express their outrage at politicians that pander to plotters of war and oppression. We can make a better world.
--- jim harris for Stop AIPAC

Jim Harris who blogs as "Tom Joad" is a staple at anti-Israel events locally. The diminutive activist (Does he really walk dogs for a living?)reportedly was upset that his organization was not chosen to organize AIPAC disruptions in Washington and was growing progressively more disgusted at the hypocrisy of his colleagues' refusal to condemn anti-democratic homophobic, misogynist regimes in the Middle east

We've seen this over and over again in the Bay area. Hatred of the state of the Jewish people isn't enough to keep these groups unified. They break and fragment over being too Marxist. Not Marxist enough. Recently we've seen much imploding and divisiveness regarding the Arab Spring, with some groups rallying behind dictators and autocrats. Anti-Israel groups begin, break up and re-form with surprising regularity.

Does this mean AIPAC protests in the Bay Area for December 2011 are cancelled?
No.
Central Valley Hate groups are already coordinating a protest at the AIPAC lunch in Sacranmento, Sunday December 04 from 10:30 AM - 1:00 PM.

They show up every year. Who could ever forget Stephen Pearcy aand Virginia Johnson Pearcy with their Hamas and Hezbollah flags, Zionist baby killer effigy and and sign glorifying Nasrallah? 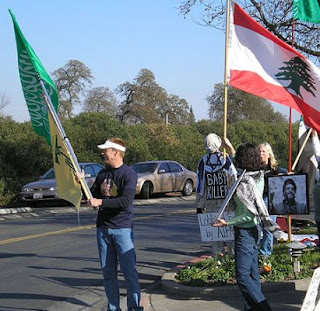 In the absence of StopAIPAC, protests on Oakland December 5 and San Francisco December 6 will likely be organized by a consortium of haters, from the AFSC, to JVP and the AROC. And if the past is any indication, while several dozen are gathering out side in protest, over a thousand people will be inside celebrating the special relation between the American and Israeli people.
Posted by Dusty at 9:33 AM

These little groups are just an excuse for these mental midgets to air their rabid anti-semitism, a sort of open air mass-masturbation rally!! They could not really give a flying f#ck about the savages on the other side of the planet!!