Activists Complain: Givon prison is not the Gaza Grand Palace

The Flotidiots from this weeks assault on Israel's borders, "Freedomwaves" are spamming our inboxes with all sorts of whining innuendos. Clearly, the 27 "activists" were expecting a vacation in the luxury Gaza Grand Palace hotel , 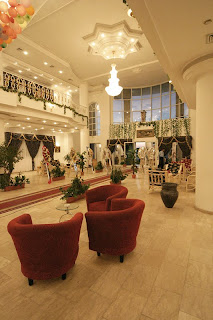 and were profoundly disappointed when their accommodations changed to the Givon Prison. 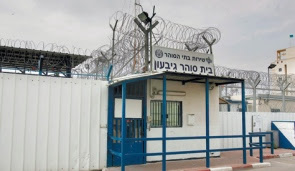 We've all had our vacation plans go awry. Bad weather. Flight delays. The Flotidiots have taken complaining to a new level, alleging violence, beatings, and mistreatment at the hands of the Israeli government. In an act tantamount to torture, the activists had their cellphones confiscated. Oh, the inhumanity! That must violate the Geneva convention - don't all human beings have the inalienable right to cell phone access?

From one of the Flotidiot Commandants, Greta Berlin:
"Greek captain of the Tahrir Giorgos Klontzas has confirmed the use of violence on him by the Israeli soldiers during his interrogation in a interview he gave to www.Omniatv.com

He specifically reports that he was handcuffed on hands and feet , very tightly which created a blood circulation problem and that in order to make him give his fingerprints he was held by three soldiers and one was holding him in a strangling way almost suffocating him.

At one point they stuck two fingers in his eyes creating very strong pain. He said that he was very calm, he did not speak aggressively and that he just requested to see a lawyer... He also confirms that some activists were very badly treated."

There you have it. I remember the day when sea captains were "manly men". Not any more. Giorgos Klontzas, whining about tight handcuffs? Really, now? Whats next- will he write about the toilet paper being too rough?

But our sea captains' comments were mild compared to the vitriolic ramblings of David Heap who began his diatribe:

"I write to you from cell 9, block 59, Givon Prison near Ramla in Occupied Palestine."

And then he began to list his demands:
(no, not whole chickens, free college and cable TV- not this time)

The arrogance and entitlement of the blockade runners is astonishing, especially in contrast with the way Hamas treats its prisoners. Gilad Shalit was kept in solitary confinement for 5 years, never once seeing sunlight, the wounds received in his abduction festering after 5 years without treatment.

David and Giorgos- its obvious you are doing all you can to extend your 15 minutes of fame, but you aren't going to get room service and a mint on your pillow, no matter how hard you whine. Grow a spine already.

Freedomwaves is promising more flotillas. Haven't they noticed? No one cares.
Posted by Dusty at 6:25 PM

So your blog is a waste of your time - no sensibility and no understanding squandered on your part. You must be addressing those who do care.

I care about Gaza and about the people of Palestine;
In the modern world we are all neighbours.

The flotillas were little more than a high profile publicity stunt, and no one cared. Big yawns all around, aside from the usual agitprop websites

In case you are really interested in doing something in service to mankind- there really are people starving in Syria. Now might be a good time to organize a flotilla.

I know what you are thinking. You might actually get hurt doing that. I see your compassion doesn't run that deeply