In a discussion on helping children get through disasters, Fred Rogers related this story. “When I was a boy and I would see scary things in the news, my mother would say to me, "Look for the helpers. You will always find people who are helping.”

The Berkeley City Council is currently in the process of nominating 'helpers"- emergency stand-ins  for the Council, in the event of catastrophe.  Berkeley City Council representative from District 2, Cheryl Davila has nominated  Hatem Bazian, a contributor to her election campaign, for this role. 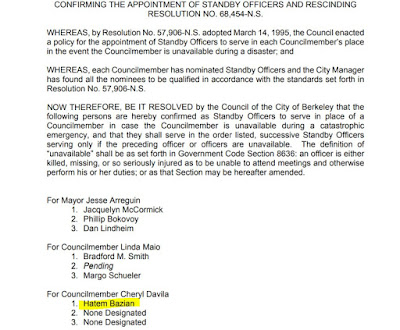 Listen to Hatem Bazian 's own words. Hatem Bazian has called for an intifada- a violent uprising- in America. He attempted (and failed) to organize a blockade of the Israeli consulate in San Francisco.

He has promoted violence.  "The only language the slave master understands is the language of violence". He has promoted harassment of our elected officials "We need to translate our strength into the harassment of the political leadership." He has used social media to spread anti-Semitic memes.

Could Cheryl Davila have picked a person less likely to unify a community shattered by disaster?

Tomorrow (July 24th, 2018) the Berkeley City Council will vote on whether or not to appoint anti-Semitic UC Berkeley Professor Hatem Bazian as a "Standby Officer" to replace one of the Councilors in case of emergency.

Please call and email the members listed below and urge them to vote against hate (sample message is below):

"AsaJew" Ellen Brotsky tesified on behalf of Hatem Bazian. She's the one who was documented attacking Jewish seniors last year at the Oakland Bakery.