You may want to avoid downtown Berkeley on Wednesday, March 9. If you need to go to a doctors appointment, or you need to pick up a youngster at childcare, you may want to chose a different route. UC Berkeley's Students for Just Us in Palestine is taking their message of hate and intolerance to the streets

We are dying-in and marching in solidarity with all Palestinians subjected to Israeli violence. Our action seeks to represent visually the people who have shed blood and tears at Israel's hands in the West Bank, in Jerusalem, in Gaza, and worldwide

We will convene at 2 at a location TBD between UC Berkeley campus and the downtown Berkeley BART station. Participants should be wearing a red shirt.

Once organized we will take up our initial positions at an intersection in downtown Berkeley. At a predetermined signal, designated protesters walk into the intersection. At another signal, designated protesters will drop to the ground and one participant will briefly speak explaining our purpose. We will then march to a second intersection on campus where we will repeat the die-in. We will be chanting slogans and rallying through campus. Everyone is encouraged to march with us as a singular unit toward our second location.

Finally, we will reassemble on the steps of Sproul Plaza where reps from different organizations will speak. Intersectionality and cross-movement solidarity are central to SJP's mission--we see the connections between struggles and are motivated to work closely with organizations of similar interest and intent.

You should also let us know if you are interested in a particular role. 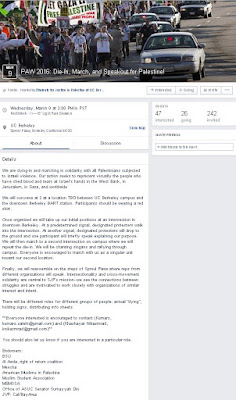 UPDATE: SJP activists are too delicate to stand in the rain. Events are rescheduled 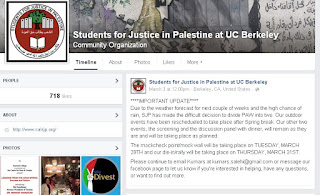 ya know it's funny when it comes to those endorses (half of them muslim brotherhood front groups) 99.5% of the general population have never even heard of them. i hope somebody passes this information to the police what they're planning is illegal. 2 PM on a Wednesday huh? must be nice to be a career leftist college student all that free time.

Wednesday we are expecting a huge rainstorm. Let them lie down in the soaking streets like sewer rats. Its will be fun to watch.

this crap on Wed. is by no means Biblical but with the rain storm it does conjure up Moses letting The Red Sea fall back into place while the pharaoh's army was trying to pass.

I suggest they go into the BART station and lay down on the tracks.

Hopefully, the cops will promptly arrest them, and hopefully, Hatem Bazian will be one of those doing the perp walk-all the way back to nablus.

. . . or maybe a train will show up before the cops do and they'll all win Darwin Awards? as for bazian, his one way perp walk should be to gaza through a terror tunnel. especially if it's one of those less then stable tunnels. but in a way he's almost already in hamas controlled territory it's called U.C. berkeley.