Yesterday, erev Purim, the Ohio State University student association voted on a BDS resolution. Cailin Pitt's response on Twitter is a perfect example of the ugliness, divisiveness, and abject hatred that BDS brings to a school 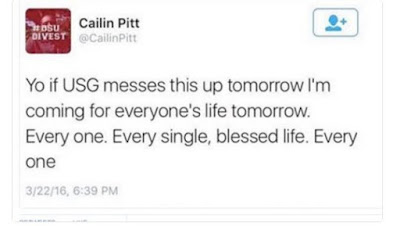 If Cailin just wanted attention for his cause, he certainly received it.

From Cailin Pitt's blog, by way of an "explanation"

On Tuesday March 22nd, it was announced that the Undergraduate Student Government on campus had received a letter from three Ohio politicians, asking USG not to divest. Divestment has been a popular topic on campus for quite some time, as USG has been deciding whether or not to support divestment for the past several weeks.

This tweet  was poorly worded. It also gave the impression to some members of USG that I was threatening lives, which was not my intention at all.

"Coming for lives" is a popular slang term that means to address and correct something that was done or said. In my usage of this slang term, I attempted to say that I would follow up with USG senators and leaders if OSU Divest was not given a fair hearing because of outside pressure, and I would try to figure out what went wrong. Once again, this tweet was poorly worded, and was also poorly timed because this was said on the same day of the terrorist attacks in Belgium.

Yep. He actually wrote: "Coming for lives" is a popular slang term
Nice try, Cailin.
But, no, its not. 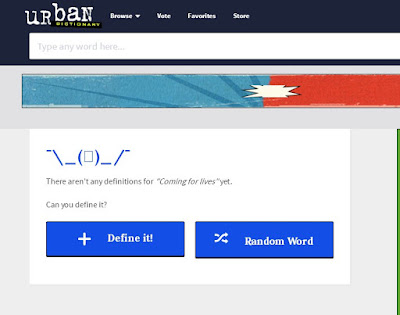 Incidentally,  there has not been a single word from the OSU divest organizers denouncing Cailins' threats of violence. Despite Cailin's threat, the resolution was defeated  9-21-15.

Ironically,  Cailin Pitt, a  fourth-year in computer science and engineering  and a Resident Assistant at Ohio State University once created a mobile ap to keep students safe on campus

UPDATE:
Campus police have investigated and have determined that this was not a 'credible" threat