Church sanctioned hate in Berkeley, of all places.

According to their website, the Berkeley Fellowship of Unitarian Universalists is a progressive spiritual community that stands proudly as a beacon for social justice.  BFUU has twice received the “Moral Beacon” Award from the Pacific Central District of the Unitarian Universalist Association, for its “extraordinary courage and commitment in the work of creating a better world.”

On March 20 this "beacon of social justice" proudly sponsored notorious anti-Semite Ken O'Keefe .
The BFUU was not simply renting out a space- they took an active role promoting O'Keefe on their mailing list, their facebook page

as well as on their community calendar. 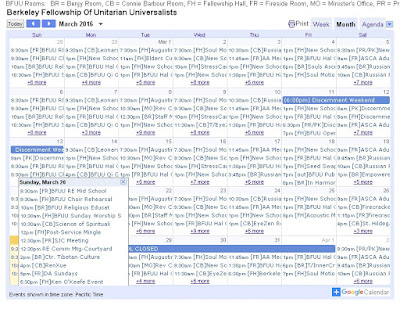 O'Keefe  is current touring the US on what he calls his  "F**k the TSA/Homeland Security tour".  He was introduced by Vic Sadot of the BFUU Social Justice committee. His talk at the BFUU was laced with unfiltered profanity

The Unitarian Universalists in Berkeley have jumped feet-first into the anti-Semitic swimming hole with this action, and are now find themselves complicit in the promotion of abhorrent blood libels, conspiracy theories, and pure unadulterated hate.

Early in the talk, O'Keefe stated "If there's one group on the planet you really can't criticize its pretty damn obvious. I'm sure everyone is just waiting for that word to come out", before launching into his tirade on the parallels between Jewish and American supremacism.

From his abashed support for the misunderstood and misrepresented Nazis to his admiration for the Syrian Butcher Assad who "did his job admirably", Ken O'Keefe's hate flowed with ease.   "We can't use certain words. Language has become manipulated. Political correctness is the order of the day and people like me are supposed to be vilified because I'm anti-Semitic... My problem with Judaism is based on my anti-supremacist perspective", adding  "the people I'm allegedly against aren't even Semitic They don't come from that region. They don't even speak Hebrew. Ashkenazi Jews come from the Caspian basin"

His vile unhinged and  unsubstantiated accusations were met by an appreciative audience, which included his fellow traveler on the 2010 Gaza flotilla, Paul Larudee

Spoken by Ken O'Keefe,  at the Berkeley Fellowship of Unitarian Universalists:

"Those that are effectively running the world primarily through the financial system are psychopaths, sociopaths. Many of them, if not all of them are pedophiles. Many of them are involved in something as nasty sadistic and untouchable as f**ing little boys and little girls before they sacrifice them."

"The system is almost totally controlled by Jewish bankers"

"The Jewish supremacist state of Israel largely adheres to Talmudic Judaism and boy oh boy lets get into some religious texts that are obscene as you could imagine".

People who don't understand that "the power structure within Israel is operating largely within Talmudic dictates are naive"
These  "Talmudic dictates" are  " the authoritative document for the Jewish supremacists who are running the country" according to Ken O'Keefe. O'Keefe  included a sickening array of lies too vile to be repeated.

Lest you assume he distinguishes between "Jews" and  "Zionists", O'Keefe added  "The Jewish people are collectively responsible for the Jewish state".

That Ken O'Keefe is capable of spewing such venomous hate and lies is unsurprising. What is shocking, however is that the Berkeley Fellowship of Unitarian Universalists would promote it and give it legitimacy. 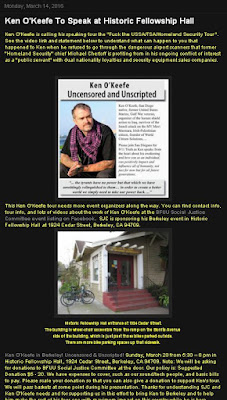 Let me guess. No indignant letters or frantic petitions from Jim harris?

oh look at ken he's so cute in his trendy purple entifada scarf! can we have a close up shot added to this posting so we can all see his cool tear drop tattoo on his face? and here i thought only street gang members sported those tats i guess it shows how progressive ken okeefe is.

The BFUU Social Justice Committee did not authorize the O'Keefe event. A couple of our members stood up and protested the antisemitism. I was appalled watching the video of the event. We will never have him back! The Board of Trustees of BFUU, who did not authorize this speaker, will release a statement shortly. As chair of the SJC, I personally offer my apologies. I was on a leave of absence due to poor health, but that is no excuse. It won't happen again. Holly Harwood

O'Thief is getting Progressively Fascist.

Thank you for your comments, Holly, but this was clearly done in the name of the Social Justice Committee- and advertised and promoted as such.


When the statement is released, please let me know and I will publicize it.

So, Holly Harwood, "The BFUU Social Justice Committee did not authorize the O'Keefe event." Then how come this event was promoted on your facebook page and your community calendar? I am very curious to see how you will wiggle out of this one. And if you manage to do that, I will never trust your word in the future!

One SJC member took it on himself to put the event on the Facebook page and calendar. He claims he didn't know O'Keefe would make antisemitic statements. Our committee dropped the ball on this one. We are responsible. I have pancreatic disease and was not actively participating at that point, but that is no excuse. No one looked up O'Keefe's speeches or writings. In the future we will do that, and make clear to anyone who wants to present at the Fellowship that antisemitism and other forms of bigotry will not be tolerated. Hate is not a UU value! Again, I am sorry this happened and take responsibility for not researching O'Keefe.

Is the SJC member still on the committee, Sappho ? Is yes, why? If yes, your statement rings hollows.

Holly Hardwood,that is the problem. A couple of your members stood up and protested. The audience should have All walked out. Shame on the unitarian church. Your true colors are showing.

We are totally responsible. The second time Atzmon approached us, I was on the committee and we turned him away. I agree that everyone should have walked out and had their money refunded.

Holly Harwood,I took the time to read about Ken O'Keefe on wiki. Your "social justice committee" could have done the same. The last lines state " In April 2015 O'Keefe gave a speech in a secret rally held by Nazi sympathizers,Holocaust deniers and their supporters from across the world". That wasn't too hard. You are NOT a social justice committee. Why pretend? I am a Berkeley resident and I can see the road that you and your church are taking. It is very familiar to a Jew like me. It is not about the Palestinians cause that you care about, we both know very well what the real issue is.

The idea they didn't know who O'Keefe is seems somewhat unlikely considering the endorsement on the youtube livestream page:

"This is our first live stream attempt from our SOCIAL JUSTICE IN THE HEART OF BERKELEY YouTube Channel. We are the Social Justice Committee of the Berkeley Fellowship of Unitarian Universalists. We hope you can join us at 5:30 Pacific Time. 8:30 EST. This is Ken O'Keefe's “Fuck the USSA/TSA/Homeland Security Tour”. The theme of the speech is "Ken O'Keefe Uncensored and Unscripted". Our Live Stream Team is Vic Sadot, Afred B Dela Cruz, and Claudio Marty of IAmTheFaceOfTruth.

Ken O’Keefe’s original marine conservation work has been somewhat overshadowed by his non-violent, but fully confrontational work for human rights. He is an ex-US marine and Gulf War Veteran, who formally renounced his US citizenship in 2001. O’ Keefe’s activities to date include founding Human Shield Action to Iraq (2003), serving as a captain on the first Free Gaza Mission (2008), surviving an Israeli attack on the ship Mavi Marmara (2010) and becoming Social Enterprise Managing Director of Aloha Palestine CIC and the Samouni Project.O’ Keefe is a published author and lecturer who now holds Irish, Hawaiian and Palestinian citizenship, but his ultimate allegiance is to his ‘entire human family’ and ‘Planet Earth’. His style of activism is characterised by his involvement in disarming two Israeli commandos as nine of his fellow Mavi Marmara passengers were executed.
The Israeli military later claimed O’Keefe was a "terrorist operative of Hamas". O’Keefe has repeatedly stated that Israeli Mossad and its assets, along with traitorous elements within the US, are directly responsible for the ‘false flag’ 9/11 attacks. http://www.worldcitizen.uk.net"