*  Georgia has passed anti-BDS legislation this week. The bill sponsor, Georgia Sen. Judson Hill declared it  “a critical step forward in defending Georgia’s state economy and public policy” and referred to it as “taking a stand against the anti-Semitism and discrimination of the BDS movement.”

It is the sixth state to pass such legislation, joining South Carolina, Illinois, Florida, Arizona and Colorado.  21 states are currently debating anti-BDS legislation, including California.

Anti-Israel groups are so alarmed by this new  and unexpected battlefront that both JVP and American Muslims for Palestine have hired coordinators to influence legislative policy.

*  From the Times of Israel: Good news about the Israeli economy

This remarkable increase in foreign investment represents an overwhelming vote of confidence in the Israeli economy, and rightly so. In spite of the global recession of the last decade, Israel’s economy saw consistent GDP growth, above even that of the OECD and the United States. To boot, Israel’s unemployment rate hovers around 5% – among the world’s lowest.

* A local blogger has documented many examples of BDS fails within the Bay area, including multiple sightings of Zim containers.  (What? Could Block the Boat have lied about their "success" in ridding Oakland of the scourge of  Israeli-associated shipping? ) 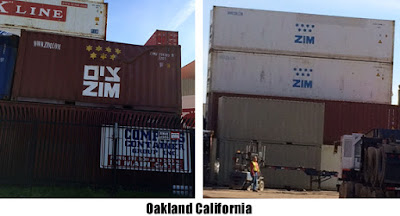 The current  proliferation of Zim containers locally hasn't escaped the watchful eyes of the BDS holes, either

Universities rejecting BDS this month include:
U Minnesota Capital U U Indianapolis Ohio State Northeastern

Even with so many tangible successes, there is still much work to be done.

From the Algemeiner, written by Roz Rothstein and Yitzhak Santis

Despite Impressive Victories Against BDS, the Battle Is Not Won

Complacency, however, is not an option. There is something to be said about the publicity these BDS debates generate. The loud and antagonistic disputes inject vicious anti-Israel propaganda into campus communities, often creating a hostile and unsafe environment for Jewish and pro-Israel students — and poisoning uniformed minds about Israel.
The struggle against BDS is not yet won. Education about the complex Middle East reality must be continued on North American campuses to combat the lies and misrepresentations of the BDS movement.
The road ahead is long and difficult, but the pro-Israel struggle against BDS will prevail if we continue to turn myths and libels into truth for an unsuspecting public.
The real lesson is that when we fight back, we win.

nice photos from Oakland who ever shot those has a great eye. this siusaidh chaimbeul seems to be a bit distressed about the proliferation of Israeli commerce with California in the face of BDS failure. i don't want to upset her any more then she already is so please nobody out there tell her that Oracle just bought an Israeli start up for 5 million earlier this month to. i think siusaidh chaimbeul should try to get all this BDS fail off her mind and go take in a nice movie this weekend like the new Batman vs Superman. hey do you think the BDS movement will try to boycott that movie because one of the leading characters in it (Wonder Woman!) is played by Israel actress Gal Gadot? gee whiz i hope not, no doubt ticket sales would plummet all over the world for sure :)