Dubbed by Howard Jacobson as the "offense-taking as lifestyle choice" folk, the same delicate flowers that recoil at giant Pinocchios  have a new reason to be offended.

An event, "Suffocating Embrace? The Future of Palestinians in Israel," was part of the Middle East Studies' one-sided "Critical Conversations on Palestine/Israel" series at Brown University. Speaking were Haneen Zoabi, a member of the Knesset  facing 6 months suspension for calling Israeli-Arab police officers "traitors,"  threatening them and directing a protesting crowd to spit in their faces.  Other participants included Shira Robinson from George Washington University,  Areej Sabbagh-Khoury from Columbia University,  Gershon Shafir from University of California, San Diego, and Beshara Doumani, the Saudi born Palestinian-American chair of Middle East Studies at Brown.

From a press release by Open Hillel, printed in its entirety at Jewschool

In a dystopian twist, the latest development in the attack on open discourse by right-wing pro-Israel groups appears to be the use of robots to police academic discourse. At a March 3, 2016 event about Palestinian citizens of Israel sponsored by Middle East Studies at Brown University, a robot attended and accosted students. The robot used an iPad to display a man from  StandWithUs, which receives funding from Israel’s government. 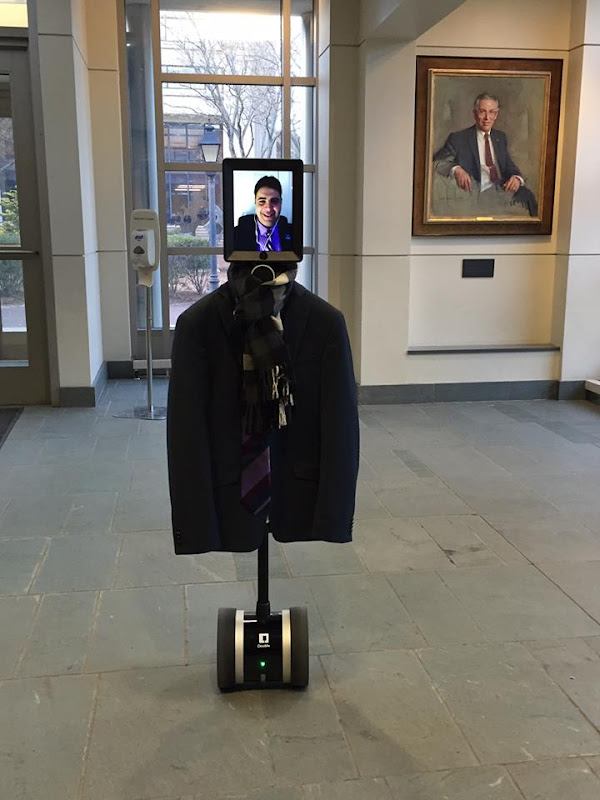 The robot wore a suit and tie, and had an iPad in the place of its head, which displayed the StandWithUs employee. The man who appeared on the iPad told questioners that he worked for StandWithUs. The robot was accompanied by a man identified by event organizers as also affiliated with StandWithUs, and the two spoke together in Hebrew. Students believed that the technology being used was a “Double Robotics Telepresence Robot for iPad Tablet” from Brookstone, which retails at $2,299.99. It is unclear at this time whether the individual that brought the robot was a student or professional employee of StandWithUs.
Before the event began, students say, the robot approached students and harassed them about why they were attending the event. Students declined to engage with this bizarre form of intimidation and ignored the robot. At the event itself, the robot and the StandWithUs affiliate remained in the back. During the question and answer session, the man briefly left the robot’s side to ask a question.

Dreaded Zionist Spy robots. Its a natural progression of course, from the same people that brought you Spy storks.  Spy Eagles.  Spy Vultures.  Spy Dolphins and of course, the spy squirrel

The developer of the device, Roey Tzezana, PhD. had a more innocent explanation which he posted on the Open Hillel Facebook page. He had permission from the organizers, the device did not record, and was an educational experiment:

Dear Open Hillel,
I’m afraid there’s been some mistake in your report. I’m the co-founder of Tele-Buddy – a company that brings robots everywhere so that people will be able to log into them and share their opinions.

A few days before the event, I contacted Prof. Beshara Doumani (the organizer) and asked for permission to bring a Israeli using the robot. He confirmed, saying that the event was open both for human beings and robots. I also promised that since the robot can (and should!) be used to enrich any discussion, I would be happy to host another person who couldn’t come with his/her biological body in the next panel: whether it is a Palestinian, a Chinese, a North-Korean or anyone. The robot can serve such valuable purpose for all debates and panels!

Anyway, Mr. Shahar Azani from StandWithUs took control over the robot in the event. I can personally testify that he absolutely did not “harass” anyone. He talked with people, and if they didn’t talk back – he just went on talking with other people. It was fun, and people took pictures and were interested to hear about Shahar and the robot.

As for surveillance or Israeli support for this venture: you’re absolutely wrong. No footage of what the robot ‘sees’ is being saved anywhere, and the Israeli government has absolutely no connection to this use of the robot. It was strictly my idea, and I stand behind it: if we can enrich debates with more points of view, to reach more meaningful insights about the future, how can we allow ourselves not to do so?

I’ll be back in Providence next week, and would be happy to meet with you (with or without the robot) and discuss the event and the way you see it – and how we can all make better use of the robots in future events, with or without connection to the Israeli or the Palestinian issue.

Stand With Us provided the follow letter it sent to Jew School:

Dear Editor,
We were surprise and saddened to read the following story on your blog

The article published is inaccurate in multiple ways. It would have been appropriate and demonstrate journalistic integrity and professionalism to seek information from StandWithUs prior to publishing incorrect information.

The “Robot” used is not a drone, nor is it or was it at any point owned or invented by StandWithUs. It is an invention created by two companies: Telebuddy and Double Robotics and our participation at the event was initiated by Telebuddy CEO, Dr. Roey Tzezana, who told our staff member that he has permission from one of the organizers of the event to attend the discussion with the “robot.”

To the best of our knowledge, the invention meant to enrich discussions and conversations by allowing remote participation in an interactive manner, with great potential for a variety of opinions, meetings and engagements.

hannen zaobi shouldn't have been suspended she should be prosecuted! if a U.S. senator said the same sort of things about his or her own country as zaobi says about Israel they would have been out of a job and possibly arrested. especially when it comes to all the out right support for Israel's genocidal Jew hating enemies. in same ways political correctness is worse in Israel then it is here. as for Brown "university" i know it by reputation only and it would seem it's every bit the radical leftist cesspool i heard it was.

A Roomba with a Nakba.