In a statement to the press, Santana manager Michael Vrionis announced “Carlos Santana is a citizen of the World and he plays his music and spreads his message of Love, Light & Peace wherever he goes...Carlos believes the World should have no borders so he is not detoured or discouraged to play anywhere on this planet. We look forward to performing in Israel this summer.”

Carlos Santana's name has been on the short-list of BDS "supporters" for years, because  BDS Holes lie. This should come as no surprise.

From the US campaign to End the Israeli occupation:
Elvis Costello and Gil Scott-Heron both recently joined the growing list of artists and performers supporting the boycott, divestment, and sanctions (BDS) movement by canceling shows in Israel.  They join the likes of Snoop Dogg, Sting, Carlos Santana, Bono, and other performers who have recently declined to play or cancelled shows in Israel due to Israel's human rights violations.

From Anna Baltzer
.... Many artists have responded by canceling appearances in Israel. These include: Carlos Santana, Gil Scott Heron, Elvis Costello, the Pixies, Devendra Banhart, the Tindersticks, Meg Ryan and Dustin Hoffman, among others.

To create the illusion of a successful movement, BDS holes lie.  Any change of plans, any sickness, any routine business decision  that results in a performance in Israel being cancelled is chalked up as a victory, and performers unwittingly find their names and their reputations hijacked to promote a philosophy of exclusion.

Good for Carlos Santana for saying "Not in my name", and for continuing to spread his message of love light and peace. 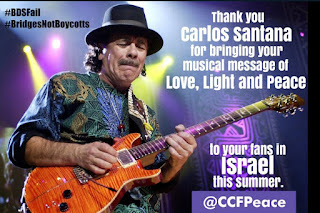 berni sanders wont be able to speak at AIPAC because of a reported scheduling conflict but also according to his campaign he promises to release a transcript of his would be speech had he been it not been for the before mentioned scheduling conflict. assuming all this is true at this point and time, i would still never the less expect the BDS holes to spin this into yet another "victory". the grand kapo max blumenthal apparently has authored a petition for sanders to boycott the AIPAC conference.
http://www.israelnationalnews.com/News/News.aspx/209594#.Vu2entIrJkg

i've always felt like the BDS bowel movement was more of a dog n' pony show then anything else. to say they've made even a dent in the armor of Israel's robust economy would be giving them too much credit. those who REALLY matter in the world of global economics don't give a shit about BDS. take Rolls Royce for example just recently... http://www.israelnationalnews.com/News/News.aspx/209646