How JVP colluded with the U.S. Presbyterian Church

Several months ago, JVP ran a rather silly little campaign to “beat” AIPAC in the number of likes on its Facebook page.  Using email blasts, social media and targeted ads on Facebook, they were able to increase their numbers. Glancing at their Facebook page, it appears they’ve achieved this milestone in their usual manner- through deceit and manipulation.   Does anyone really believe  “Joos for Palestine”  or "Net Workdood" represent actual people? 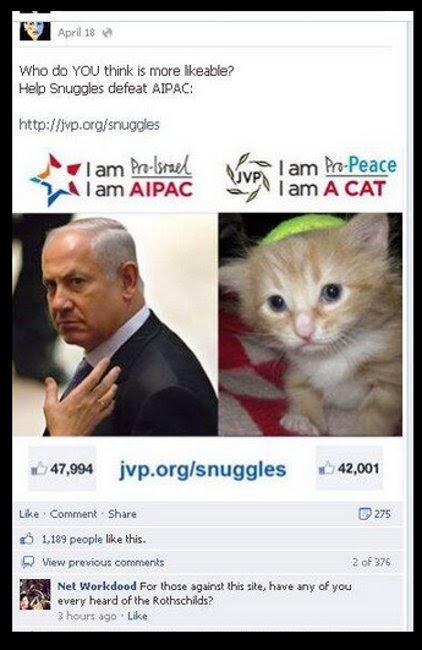 There was a reason for the campaign.  This group, which represents an outside fringe of American Jewry used its social media stats to gain credibility for its extremist views, and to bolster its claim that it speaks for the American Jewish Community.

Nothing could be further from the truth.

When the Rabbinical Council of the Jewish Voice for Peace  penned  an open letter supporting Presbyterian  divestment. it had been signed by only 8 rabbis, 4 rabbinical students, and a cantor. Contrast that with the 1700 rabbis and cantors who signed  the letter opposing divestment.

Rabbi Eric Yoffie, former president of the Union for Reform Judaism has written in Haaretz regarding the Presbyterians divestment vote, and the collusion of JVP

How a radical anti-Israel Jewish group colluded with the U.S. Presbyterian Church

The Presbyterian leadership is not naïve. It has been working with the Jewish community for decades on a range of issues and has been engaged in dialogue with Jews on divestment concerns since 2004. It knows how the Jewish community is organized. It knows who has a grassroots presence and who does not. And any suggestion that there is significant Jewish support for divestment or that Jewish Voice for Peace represents any more than a tiny sliver of Jewish opinion is simply preposterous.

My view is that the church desperately wanted Jewish backing as cover for their pro-divestment position and Jewish Voice for Peace became the instrument for providing that backing—or, perhaps, a means for church leaders to delude themselves into thinking that Jewish backing really exists.

Either way, none of this would have worked without the collusion of Jewish Voice for Peace, which has a tradition of cloaking extremist principles in ambiguous language.

Consider the disparity between the church's resolution and the views of Jewish Voice for Peace. The church wanted to pass a "selective divestment" resolution without seeming too extreme. The Jewish community, to say the least, was not convinced; it concluded that the church's action suggested anti-Israel attitudes. Nonetheless, the final resolution passed by the general assembly called for selective divestment in specific companies while also reaffirming Israel's right to exist, endorsing a two-state solution, and refraining from aligning with the global BDS movement.

Jewish Voice for Peace, wanting to play the hero and stay in the good graces of the church leadership, had nothing to say about these three points; an uninformed observer might think that it supports the church in the final wording of the resolution. But it doesn't. As anyone who has read its mission statement and literature knows, it supports BDS, does not endorse a two-state solution, and while it does not call for Israel's destruction, does not affirm her right to exist either.

In short, those young people in black T-shirts represent a radical anti-Israel position that goes far beyond the "selective divestment" that the church professes to call for.

He is right, of course. For all of JVP's  attempt at a socially acceptable veneer , they've admitted that they support "full" BDS ("occupation" is just a red herring) 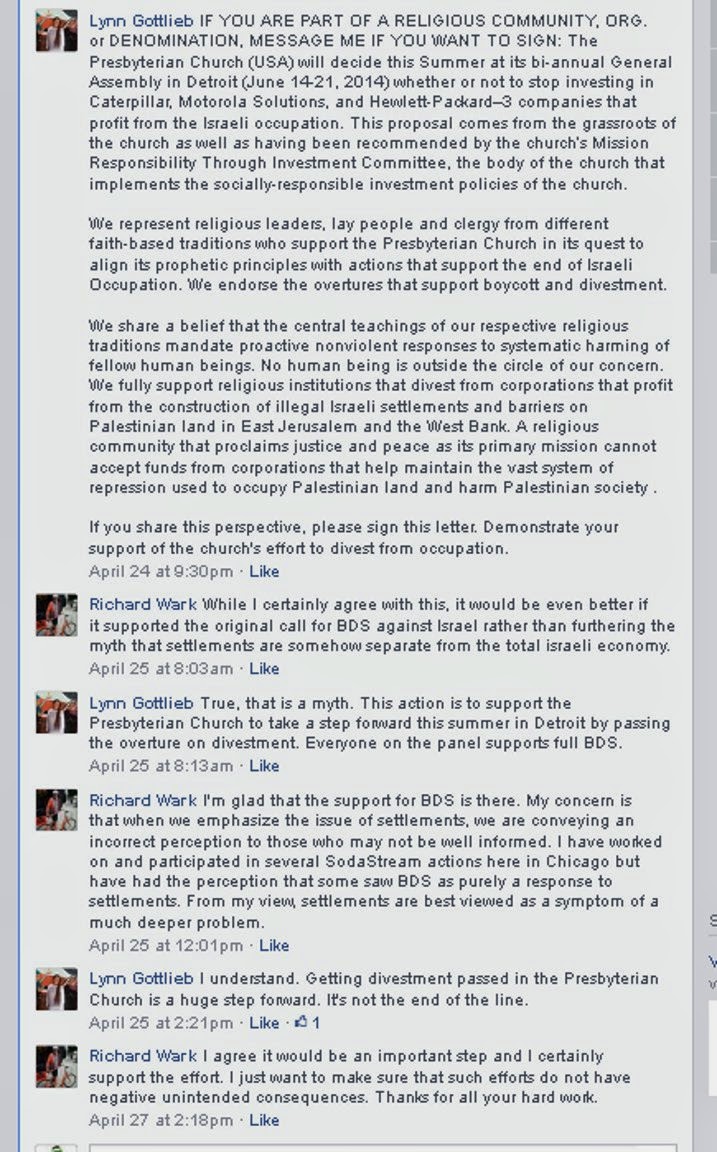 Rabbi Yoffie concludes with a suggestion to Presbyterian leadership


Get your information about the Jewish community and the Jewish tradition from a source other than Jewish Voice for Peace. And if you want, as I do, to see a reconciliation between the church and the Jews, put an end to an alliance that is leading you astray and generating resentment in the Jewish world.

Tomorrow, JVP has planned its first Congressional briefing. Lets hope Congress is smarter than the Presbyterian leadership.
Posted by Dusty at 7:08 PM

There was even one disgusting JVP ember, a "Rabbinical student called Arianna Katz who tweeted Hebrew bell sings to the Presbys for boycotting Jews. That's how sick these people are