Fighting back against BDS. Yascher Koach to Western Washington University

Today, the Associated Students of Western Washington University  became the first North American student government to pass a proactive resolution against the anti-Israel BDS movement. The resolution outlawing boycotts based on national origin  passed unanimously 7-0.  It is the first time a student government has taken  proactive steps to protect itself from the bitter divisiveness of a campus BDS campaign.

The student government at Western Washington University (Associated Students WWU) voted unanimously Wednesday that it will not consider boycotts, divestment and sanctions (BDS) based on national origin, according to Israel advocacy organization StandWithUs.

The 7-0 vote represents the first time ever that a North American university’s student government took pro-active legislative steps to protect students from discriminatory BDS campaigns, such as the ones that have targeted Israel at a number of campuses in recent years.


According to the resolution, the ASWWU will not support BDS campaigns because, “tensions between students related to foreign conflicts should be managed in a healthy and collaborative manner rather than be exacerbated.”

It also expressed concern that BDS campaigns, “can cause students to be targeted on the basis of nationality” and lead to “disrespectful bias, hostility, hate, or harassment.”
WWU Student Alysa Kipersztok, a StandWithUs Emerson Fellow, brought the anti-BDS resolution to the ASWWU.

“I’ve seen how divisive anti-Israel BDS campaigns have been on campuses across the country," she stated. "Western is a warm, respectful, inclusive community. Our mission statement states that WWU ‘brings together individuals of diverse backgrounds and perspectives in an inclusive, student-centered university."

Yascher Koach to Alysa Kipersztok and to the student government of Western Washington University, for standing tall against hatred on campus.

A copy of the resolution appears below.  May this prove to be a successful model as we fight back against the ugliness and divisiveness of BDS on campus. 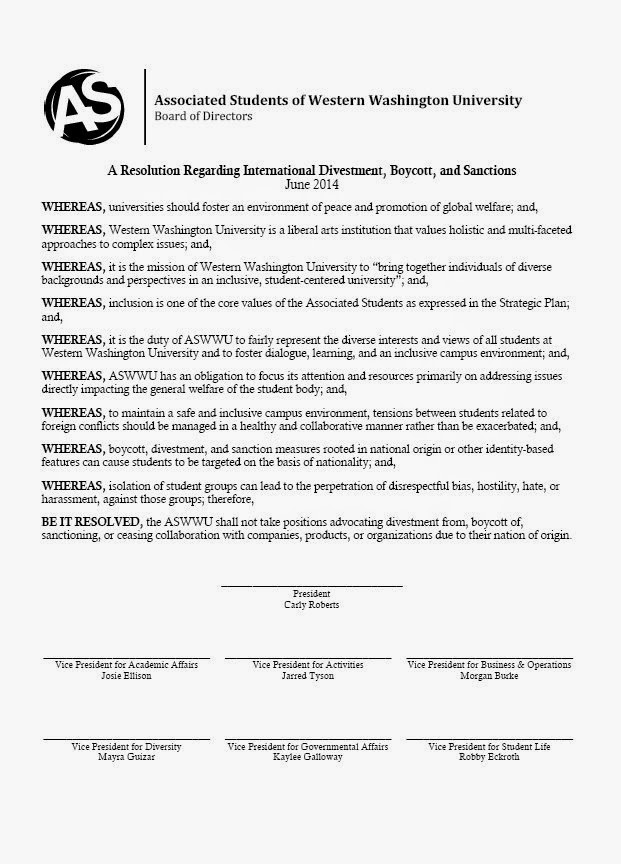