From the Mike Report, a great new cartoon highlighting the rich fantasy life of the BDS cru 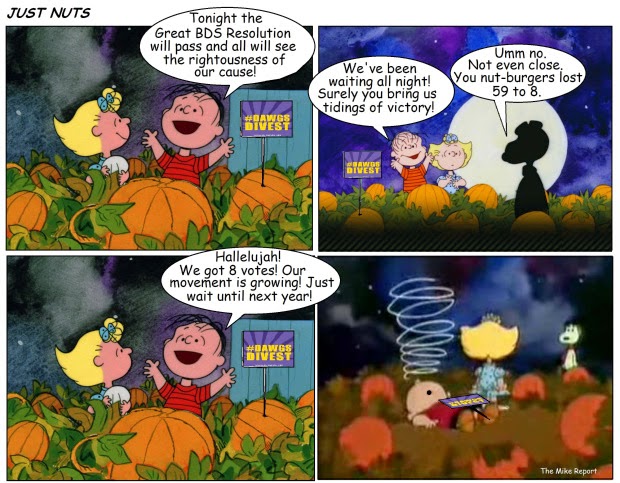 2014 has unquestionably been the year of the BDS fail. Out of fifteen campus Divest from Israel resolutions in 2014, only three were passed and validated. But of all the BDS losses under their belt, the most decisive smack down came from the students of the University of Washington this past week.

Let us understand the magnitude of SUPER-UW‘s humiliating loss. From the first day of the Fall quarter, SUPER-UW and their allies, Jewish Voice for Peace in particular, saturated the UW campus with BDS trainings and anti-Israel info sessions.  First tier Israel haters, like Ali Abunimah, Max Blumenthal and the Corries as well as fifth tier radicals like Wael Elasady, Jesse Hagopian, and Maya Rotem were trotted out to tell their tales of Olive tree bulldozing, baby killing, wild-eyed Jewish settlers.
When the time seemed ripe for the kill, UW student senators Peter Brannan and Amira Mattar submitted the BDS Holy Grail; divestment resolution R-20-39.

But after nine months of lectures, lobbying and leaflets the resolution went down in flames. The final tally; 59 to 8 with 11 abstentions. What this means is that Brannan, Mattar and all of the minions at their command managed to persuade  a pathetic  six senators to join them out of 78 in attendance that night!

As of today,  however, there  were 16 campuses weighing in on divestment.  Today was the final day of a divestment vote at DePaul University, where the entire student body was given the opportunity to vote on the bill. Of the 25,000 plus  students at DePaul, the resolution was only able to  garner 1,575 votes. After months of  "actions", apartheid walls, sit-ins, op-eds, spamming social media, less the ten percent of the students were sufficiently engaged by this issue to even vote, and of those,  the resolution passed by only a narrow margin- with 1,333 opposed.

Expect the usual self-congratulatory  press releases on their "dramatic victory".
Posted by Dusty at 9:59 PM