Oh, those naughty Israelis, destroying a mosque in, wait, is that Angola? 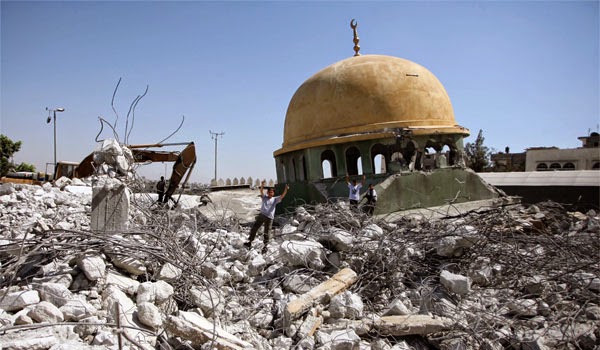 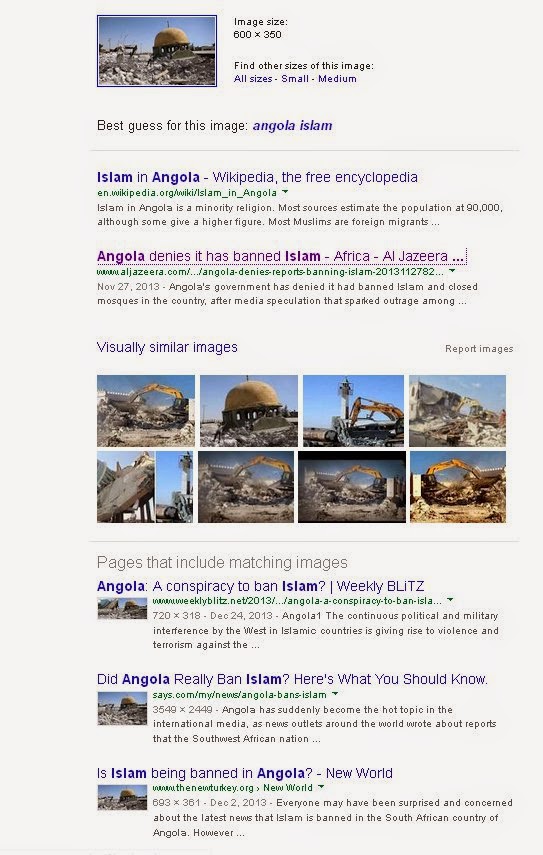 The Middle East Monitor is using a photo from a demolished mosque in Angola to illustrate the alleged demolition of a mosque in the Negev, claiming

Israeli bulldozers guarded by a large force of police started to demolish the mosque in Wadi Al-Niam in the Negev on Thursday amid residents' fears that authorities could also demolish homes in the village. A demolition order had been nailed to the mosque wall a few days earlier.

The Negev Foundation for Land and Man denounced the demolition, describing the Israeli act as a blatant assault on the sanctity of the mosque and on Arab rights to live in the Negev. It also noted that the demolition violates the right to freedom of worship as well as international laws and conventions.

But if the Middle East Monitor can't tell the difference between a mosque in Angola and a mosque in Israel why would we believe anything they've written?

UPDATE
Seattle anti-Israel Blogger Richard Silverstein,  notorious for his failure to fact check has jumped on the bandwagon to spread this fraudulent misrepresentation far and wide.

The Middle East Monitor has fully admitted this is not a photo of the alleged mosque in the Negev. (Neither, it appears, is it a mosque in Angola. Google is not always correct, apparently, and I apologize for posting incorrect info)

However, Middle East Monitor has not removed the misleading photo, which they readily admit is from 2009.
Posted by Dusty at 5:17 PM

I wanted to write privately--but I understand that the comments are moderated. Pallywood is undeniably evil--however, in this case, if I am not mistaken, the photo is of a mosque in Gaza (not the Negev)that was destroyed in Operation Cast Lead in 2009.
http://electronicintifada.net/content/cash-shortage-hampers-rebuilding-mosques-destroyed-israel/10152
The photo is used to illustrate the recent article on Angola...and has nothing to do with the Negev...but as pro-Israel bloggers, it is important to not open yourselves to accusations of inaccuracy.
Cara Bereck Levy

Thanks, Cara. The website has added the following comment, fully admitting this is not a photo of a mosque in the Negev. (neither, it appears, is it a mosque in Angola)

They have not however, removed the misleading photo,

From the Middle East Monitor:

Please note: The image used for this piece is a file photo of a Palestinian mosque razed by Israel. It is not the image of the mosque in Wadi Al-Niam.

The image used is by Wissam Nassar, of the destroyed Al-Taqwa mosque in Gaza City, taken on July 26, 2009. The mosque itself was destroyed during Israel's offensive on the Gaza Strip the year before.

Some of you may see the same photo being used online by other media outlets in relation to a story from Angola. For example, the image is used on this page. However, if you check the file name for the image on that website [look at the url at this link], you will note that the website's editors did name the photo as "Gaza Mosque". Should you require additional independent verification, feel free to contact the website editors of other sites that use this image in relation to the Angola story, and ask to verify the source of the picture.
Clarification added at 11.30 GMT on May 26, 2014

Richie boy has also been blogging that the targets of the killing in Brussels were two Mossad agents-according to his secret source. That theory went out the window today with the arrest of the killer, a Muslim from France who had recently returned from Syria.

Great that you caught them about the photo, but what about the actual story? Is it valid? if not, why not? thanks.

The story is not verifiable, and doesn't appear elsewhere in reputable news sources. I did find this alternate photo of the "mosque" . Feel free to draw your own conclusions. If this were in fact the demolished mosque, its clear why the fraudulent photo was used.