The rhetorical contortionists of Jewish Voice for Peace (JVP) would feel right at home in a P. T. Barnum traveling show. At a recent "interfaith" BDS panel held at the First Presbyterian Church in Oakland, there was an implication that recognition of Israel as the "Jewish homeland" might be acceptable, as long as it didn’t include recognition of Israel as the nation state of the Jewish people. This bastardization of language is a way to increase the palatability of JVP’s extremist agenda, an organization whose stated goal is to create a wedge in the Jewish community over the issue of Israel.

And, no. It is not acceptable.

Yedidia Stern, vice president of research at the Israel Democracy Institute in Jerusalem explains why in his essay Judaism And/Vs. Democracy: Memorial Day For The Happiest Generation , a special to The Jewish Week


… If the goal of the Zionist enterprise was to establish a normal democratic country with unassailable universal values, what do we need Israel for? Why put ourselves and our children at risk? In a global, democratic and liberal world, there are wonderful substitutes for the dangerous puddle that is the Mediterranean Sea.

The only justifiable reason for taking that risk, on both the individual and collective levels, is that it permits the seminal experience of our generation — the realization of the dream of a Jewish nation-state. We are the happiest generation in 2,000 years of Jewish history. Unlike the generations who lived in the Exile, for us Judaism is not only spiritual, but also physical. It is not just an individual, family and community faith, but also a national and political creed. Judaism without a state leaves the nation deficient, the civilization denuded and the religion with clipped wings. We, the generation with a state, are tasked with the rebirth of Judaism.

The Jewish state is not just a matter of symbols — a flag, anthem, calendar, monuments — but also, and most importantly, the concrete realization of the Jewish way of life by a collective that bears responsibility for itself and for others. Only in a Jewish state can there be a public sphere in which the language of Jewish values is used to discuss human rights and responsibilities, the uses of military force (by a Jewish army), a welfare policy that goes beyond the community, the treatment of the national minority that lives within its borders, foreign and defense policy, and every other public issue. Only in a Jewish state can there be a public dialogue between the values of liberal democracy and Jewish tradition. A Jewish state is the necessary instrument for the internal and external tasks of reforming the nation and remaking the world.

A spiritual homeland that exists in our minds cannot suffice. We need a living reality that requires Jews to face up to the process of making national decisions and to deal with the consequences of those decisions. A Jewish state is indispensable because it allows the Jewish nation to blossom within its nation-state, permits the Jewish culture to thrive in the public sphere and enables the Jewish religion to flourish as the Torah of the Land of Israel. Without a state of our own, the Jewish idea of the “good life” would remain painfully limited.

A universal democratic state offers no added Jewish value beyond that which could be gained through a strong and self-confident diaspora community. Should Israel choose to be content with a “normal” democratic existence and renounce its Jewish distinctiveness, the demand that its citizens set aside their welfare on behalf of the country would be weakened. Our power and strength depend on our ability to endow Israel with meaningful Jewish content on the national, cultural and religious planes. As we commemorate this Memorial Day, we must continue to nourish the Jewish character of Israel — to secure the fate of Judaism and to justify the sacrifice of our well-being.


Read it all here.

The Al Awda Palestinian right to return organization and the notorious anti-Semitic activist Gilad Atzmon have reported receiving unsolicited “coaching” from JVP. The Jew-washers have urged them to “keep BDS about the occupation”, and to say “Zionist” not “Jew”. It’s just a show, with smoke and mirrors designed to increase the palatability of what is widely accepted as an extremist agenda. It’s enough to make P.T. Barnum kvell. 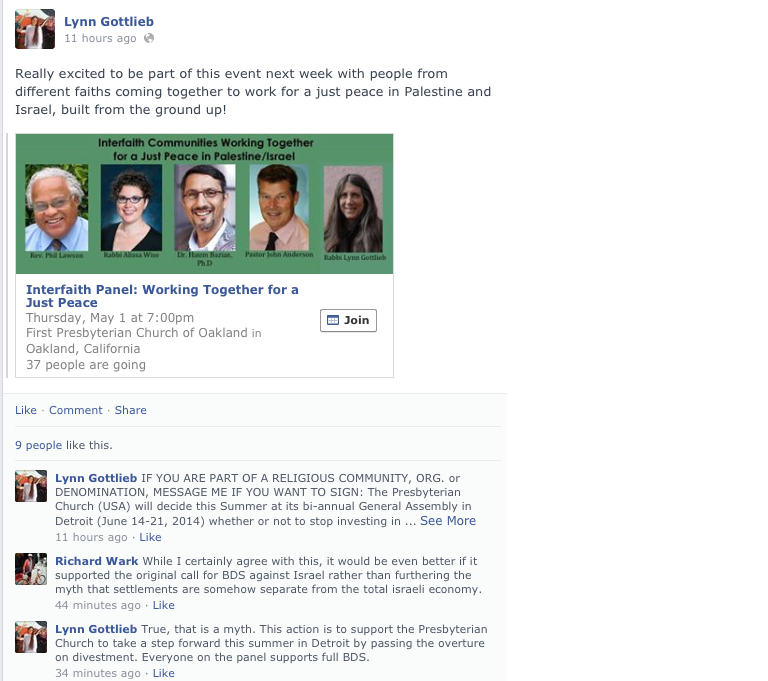 Barnum once declared “I am a showman by profession...and all the gilding shall make nothing else of me.” Jewish Voice for Peace function in the same basic role. They are showmen, putting a Jewish face on anti-Jewish ideas and all the rhetorical gymnastics in the world cannot gild that .
Posted by Dusty at 12:25 PM