Farming Injustice: Feb. 9th  has been declared a day of rage against Israeli fruits and vegetables in the UK. (If we hear of any actions on this side of the pond, you'll be the first to know) 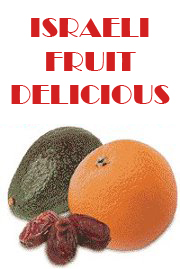 From our our friends at  Five Minutes for Israel (5mfi).
Actions you can take to counter  the BDS movement plan for a campaign against Israeli agriculture on Saturday 9th February.