We hear it all the time- the "Israel lobby" functions as thought police, stiffiling any criticism of Israel. Never mind that the  papers are full of criticism of Israel. Never mind that whole industries have developed simply to criticize Israel. Ignore the anti-Israel events held nearly weekly on college campuses.  In its condensed form, its just another version of the classic anti-Semitic canard- that the Jews  secretly in positions of power are the puppet masters controlling finance, government, and Hollywood.

At the Academy Awards yesterday, two films highly critical of Israel were up for an Oscar for "Best Documentary". Both "The Gatekeepers" and "Five Broken cameras" received funding from the Israeli government,  a testament to Israel's vigorous democracy and its individual freedoms.  Ultimately, the Oscar went to "Searching for Sugar man", about the search for an obscure singer songwriter from the 1970's.


"Searching for Sugar man" was the opening film at the Sundance Film festival,  and won both the Special Jury Prize and the Audience Award. At the International Documentary Film Festival in  Amsterdam it captured both both the Audience and the Best Music Documentary awards.  It scored a 96% on Rotten Tomatoes. But  to the anti-Israel crowd, there was just one reason the film won the Oscar.  It was the Zionists. 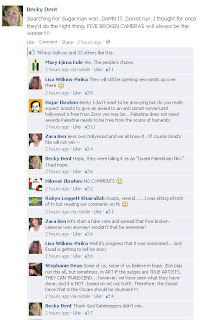 The lapse in logic is breathtaking.  The brilliant, poignant story of Rodriquez didn't win because it touched people's souls.  It was because the "Zionists" controlled Hollywood. And the Zionists would do anything to prevent   "Five Broken cameras"  from winning the Oscar.  Anything. Never mind that the self same Zionists in control of Hollywood did nothing to prevent the film from being made, or to prevent its nomination. 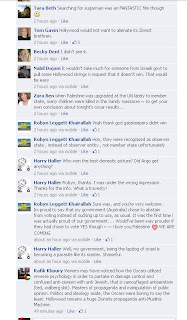 Five Broken Cameras has attracted more than its share of controversy.  Emad Burnat, the director of the film claims he was detained at the airport until Michael Moore rescued him.  But others have called this a hoax and a publicity stunt


Was Michael Moore's Dramatic Rescue Of An Oscar-Nominated Director Just A Publicity Stunt?

Moore claimed Emad Burnat was detained at LAX on his way to the awards ceremony. Sources at the airport call Moore's account of the events “baloney,” and say the director was not detained at all.

This morning though, a source working at LAX familiar with the situation and speaking on the condition of anonymity, offered a very different account of events.
When Burnat arrived at the Customs and Border Protection desk at LAX, the source said, he was asked to state the purpose of his visit; when he said he was here to attend the Oscars, he was asked to produce his ticket.
When he wasn't able to produce that document on spot, the source continued, Burnat was taken to a secondary inspection area where he found the ticket, showed it Customs officers, and was immediately allowed to proceed to the baggage claim.
This source insists the whole process took no longer than 25 minutes total, and was standard practice for anyone entering the country.
"He was not racially profiled," the source said."It is being used as political stunt, and a publicity stunt for the movie."The source's account is consistent with Customs and Border Protection's policies, which maintain that detention is only used when an individual is found with illegal drugs, undeclared money, or is trying to enter the country illegally.
CPB, for their part, would not comment on the incident.The agency said in a statement, "Due to privacy laws, U.S. Customs and Border Protection is prohibited from discussing specific cases. CBP strives to treat all travelers with respect and in a professional manner, while maintaining the focus of our mission to protect all citizens and visitors in the United States."Neither Michael Moore nor Guy Davidi responded to requests for comment on the allegations as of press time.