Anti-Israeli  activist Michael Rabb is urging people to protest a synagogue in Boulder, Colorado  this weekend.  According to his blog,  "Michael in Palestine".Michael's been active with Code Pink, Interfaith Peace- builders and with the American friends Service Committee,  (AFSC).  Michael is a dyed in the wool BDS'er as well- and maintains the CU Divest website, where he promotes the harassing of Jews at worship.

He's that kind of peace activist 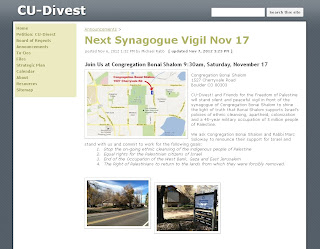 Michael tweeted JVP Rabbi Brant Rosen regarding his idea.  And as of now, there has been silence in return. Could Rabbi Rosen possibly believe the targeting of Jews worshiping on Shabbat is an appropriate venue for protest?

Its all about Israel, Rabb claims. Anti-Semitism has nothing to do with it.

This isn't the first time synagogues have been targeted by the  "Israel is always wrong" crowd.

Several years ago, David Rubinson sent a mass email to national anarchist groups, urging them to disrupt worship in synagogues, presumably, because  that is where the Jews are.  "The Jews of America must be confronted with their clear responsibility", he  extolled.  Its not clear if anyone actually participated in these disruptions

And DEFINITELY no more emails to Congress, or heart-felt messages to Change.Gov and Obama, begging the conspirators to stop the conspiracy.


Here is an excellent article, with a detailed list of actions we can take, from James Petras.
www.informationclearinghouse.info/article21613.htm
I have strongly suggested to many different so-called action groups, that we immediately institute a program of visits to every synagogue in the USA, on Friday evenings and Saturday mornings, and rise in each congregation and - in dignified firm and unemotional voices- repeat "STOP THE KILLING"-- We need to go in groups of 3-4, to insure that we have 1 person as a defensive shield, and one as a video camera witness, recording everything. Jews especially should be doing these actions. We will face harsh treatment, and possibly physical attack, but our message must be resolute and continue week after week.
I see no possible legal impediment to this. The public, and certainly Jews- cannot be barred from entry to the services, and it will be extremely hard for the Synagogues to enforce exclusion. If they do, we can speak on the front steps, on the street, in the parking lot.
The Jews of America must be confronted with their clear responsibility- far more than complicity-in the mass murders, occupation, and forced starvation of the people of Palestine.
If any of you wants to work on this, just let me know.
Thanks,
DR


Seventy-three years after Kristallnacht , Jews and synagogues are still targeted.  And again, there is silence.

this asshole is probably in mourning right now given that Israel just a blew a couple of his hamas friends back to Hell where they belong.