Israeli Committee Against House Demolitions on the verge of collapse

On November 1, 2012, the Israeli Committee Against House Demolitions (ICAHD) distributed its monthly newsletter, which included a description of the NGO's "financial collapse." According to ICAHD founder Jeff Halper, this was "due to over-dependency on a few major donors...given the limited pool of funders willing to step out and support such an outspoken group."

As a result of the financial difficulties, ICAHD faces eviction from its offices, and co-director Itay Epshtain (formerly of Amnesty-Israel) has announced that he will leave the organization. Halper indicated that ICAHD would focus on grassroots fundraising, as opposed to "applying to large and bureaucratic donors."

ICAHD's main donors have included the European Union; the governments of Denmark, Switzerland, the Netherlands, and Sweden via NDC ; Spain; Trocaire (Ireland); UN Development Programme; World Vision; and Mennonite Central Committee. While ICAHD's statement did not specify which funding had been cut, a highly controversial €169,661 grant from the EU expired in June 2012.

ICAHD’s extensive difficulties demonstrate the degree to which political advocacy NGOs are dependent institutionally on what some funders refer to as “project support.” Although these government donors often claim that their money does not fund NGO salaries, travel, public relations, and offices, this is clearly incorrect.

There's always a local angle. Here's local anti-Israel Activist Hassan Fouda,  Board Director at ICAHD.. Hassan, an Egyptian,  is posing as a Jew in front of the Oakland Marriott hotel, in an apparent attempt to "Jew -wash" the protest.  We can only speculate if the new found austerity budget of the ICAHD will affect Hassan's  frequent international travel. 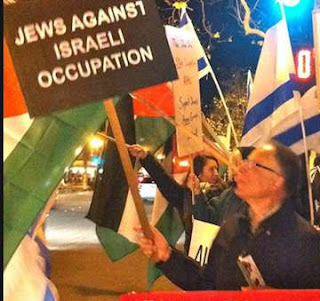