The menagerie of animals under Zionist control continues to grow  Our friend at Elder of Ziyon has been diligently keeping score.

First, there were the Evil Zionist  Super-Rats   Then there were the dreaded  Zio-Boars.   Do your children still have nightmares regarding  the Zionist Sheep of Terror  and the  Zio-cows of destruction ?  Of course, our souls cry in anguish at the exploits of the Spy Vultures of Doom.

But nothing, nothing in our wildest imagination could ever have prepared us for the fiendish Zio-bunnies.

Its clear that the local sleeper cell of Zio-bunnies has been activated.  No more sleeping in sunbeams for this squad. 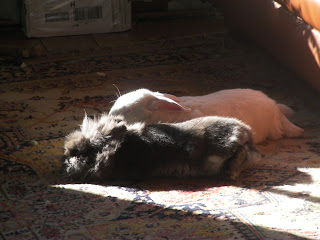 Smuggled out at  tremendous personal risk, we bring you this photo of the nefarious lagomorphic terror squad.   Having  removed Anti-Israel removed plop art from MacArthur BART, the devilish bunnies are busy destroying the evidence. 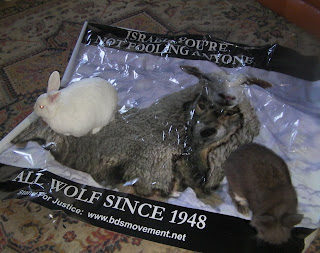 This newly activated cell of Mossad  trained of zio-bunnies is becoming increasingly active in the San Francisco Bay area, and has been implicated in countless other shameless acts of vandalism 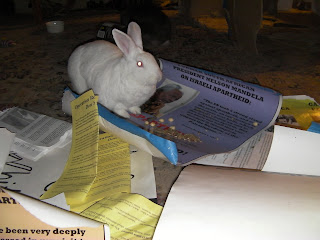 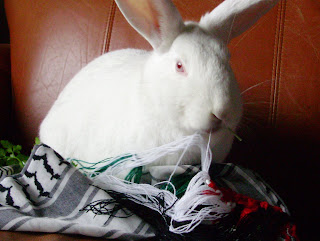 When will PETA and other animal rights groups take a stand and condemn this cynical Zionist exploitation of  rabbits for political gain?   When will the world wake up?
Posted by Dusty at 11:15 AM

Look at those fiendish little red eyes! These rabbits will stop at nothing.

The average half life of anti-Israel propaganda on the street seems to be less than 24 hours, doesn't it?

Do Zionist know no decency!?!? Think of the childrun!!

Ok I need my very own zio-bunny now!