An open Letter to Eyad Kishawi

An  open letter to Eyad Kishawi of Al Awda

Its obvious why you are so misguided.  You’ve never learned how to do even fundamental research.  (Or perhaps you do know and are simply maliciously  lying. That would make you evil.)

Just a few days ago, you sent out photos of dead children.   Heartbreaking. Tragic

You wrote “These children were murdered by Israel”.

Except for one thing, Eyad. They weren’t.

“Thanks to Tazpit News Agency’s investigative work, it was found that the photo had been originally published on a news site based in Dubai, United Arab Emirates called Moheet one month earlier on October 19. On the Moheet website, the photo was titled “Syria killed 122 Friday…Assad Used Cluster Bombs.”

These children were murdered in Syria, Eyad.

What I found even more disturbing, Eyad was this statement you made:

“These children were murdered by Israel and by extension the Zionists who support it, right here all around us.  When these Zionists go to counter protests and ignorantly carry that flag, standing across from us as we demand our right to life, they call for this horror.  “

Eyad.  This is 21st century blood libel.  You are inciting violence, not simply against the Zionists who oppose you on the street- the ones who speak truth to your lies, but to the entire Jewish community. 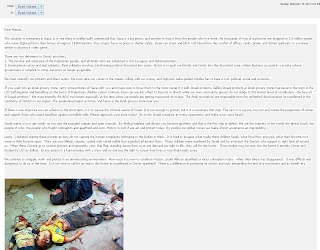 
UPDATE:
I just received this email from Eyad Kishawi. (Yes, i intend to check the provenance of the second photo as well) Its a retraction.  I'm pleasantly surprised.

I sent yesterday two photos: one had two dead children and a woman and the other had four.  As tragic as it is, the former were murdered in the Syrian civil war, resulting from a brutal regime clinging to power, a regime that had maintained a policy of avoidance with Israel while deploying fighter jets against its population.  The latter, the one of the four children, they were murdered by Israeli forces.  Humanity is universal and brutality is universal, regardless of the perpetrator.

We owe it to the Syrian people to recognize their pain as we stand with our people under seige.  A correction is due in the sea of violence.

Eyad Kishawi
Posted by Dusty at 12:00 AM

A correction was posted and clarified who Israeli forces killed

That's not a genuine apology. Lying is the fundasmental tactic among Arabs to delegitimize Israel for the last 60 years. He just got caught is all.

The family that hates together....Eyad Kishawi is married to Emily Katz Kishawi- Ten years ago, her and Sara Kershnar worked in a San Francisco rape crisis center where all volunteers pretty much had to take an anti-Israel oath. This was a facility that collected over a half million dollars in city funding. There should have been a huge scandal over it- instead it was swept under the rug.