Yet that's not what the body of the article says. Not by a long shot.  In fact, its quite the opposite
The article reads:

JERUSALEM, Oct 17 (Reuters) - Israel calculated the number of calories Palestinians would need to avoid malnutrition under its blockade of the Gaza Strip, according to a study which the Supreme Court forced the government to release.

"Avoid" malnutrition. Not "force" it.

The study, "Food Consumption in the Gaza Strip - The Red Lines", estimated the required daily calorie intake in the territory at 2,279 per person.  Apparently the  calorie calculations were based on a model formulated by Israel's Health Ministry and were  in line with average Israeli consumption.

Here's a screen shot of the deliberately misleading headline 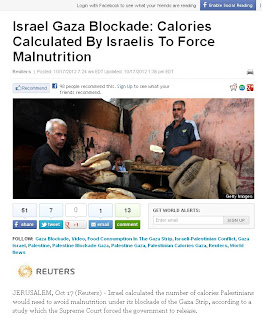 The Huffington Post has a reputation for  demonizing Israel- and has spawned a  website "Huffington Post Monitor"  that exists to debunk its lies.  How long with this hateful and misleading headline remain?  Your guess is as good as mine.

UPDATE:
The answer is less than 24 hours.  As of today, a corrected headline appears, as well as this statement:

Correction: The original version of this article had a headline of "Israel Gaza Blockade: Calories Calculated By Israelis To Force Malnutrition." This version has been corrected to reflect the text.

Here's a screen shot of the new headline 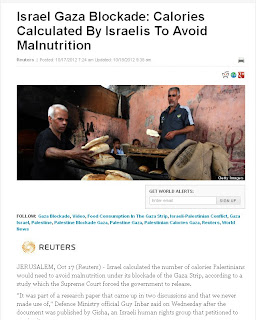