A scant handful of  "peace activists"  showed up at Walt Disney Hall  yesterday, to protest a performance of the Israeli Philharmonic.    Brandishing cardboard cut-outs of stylized weapons,  they threatened those entering the hall.

It wasn't the pieces  by Schubert, Chopin and Brahms that disturbed them.   They weren't upset by the presence of  Chinese pianist Yuja Wang or presence of the Philharmonic's  maestro for life  Zubin Mehta   No, it was the knee jerk reaction to anything with "Israel" in the name that lead to the anemic little turnout.  When Conductor Zubin Mehta  received a star on the Hollywood Walk of Fame last year,  the same ragtag group protested.

On the ground, the actual scene was rather less colorful. When my wife and I arrived about 15 minutes before the concert, we saw somewhere between six to ten protesters, with one holding an “Israel Apartheid” placard.The hundreds of concert goers streaming into the hall paid no noticeable attention to the small group, whose members however perked up and responded vigorously when one patron suggested they turn their humanitarian impulses toward the thousands of Muslims being killed in Syria, Iraq, Libya, Yemen, Mali and so forth.


And then there was this lovely couple, with an indecipherable word salad message urging us to do....something 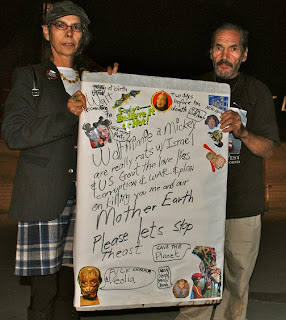 And in the end, over 2,000 showed up to hear the Israel Philharmonic, with maybe a  dozen hapless protesters loitering aimlessly.   I'd chalk this one up as a BDS fail.  Again.