Attempted murder. Its just "child's play" to Ali Abunimah of the Electronic Intifada.

Ali Abunimah of the Electronic Intifada has posted a video captioned "Israeli forces smash Palestinian child’s head to ground near Jerusalem’s Al-Aqsa". The  video has made the rounds of the usual "I hate Israel sites".  On facebook,  the hyperbole continues: 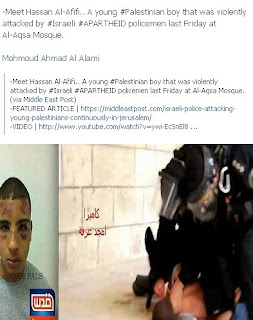 Who is this "child", this "young Palestinian boy"?

We can find the answer on the Arabic website, Wafa, the official  Palestinian news agency  which reported:"Israeli occupation forces arrested, today Friday, the Jerusalemite teenager Hasan Afif Hasan al-Afifi (age 17), of Bab al-Hadid in the Old City, after they attacked him. Al-Afifi’s mother told Wafa that her son was arrested during the violent confrontations that occurred at the Al-Aqsa mosque today, and that her son was nowhere near the mosque and did not participate in any activities.

17 is hardly a "young Palestinian boy". Hardly a "child".

The arrest of Hasan  al-Afifi  followed a day of clashes on the temple Mount.  According to the Lebanon Daily Star


Israeli police hurled stun grenades and fired tear gas to disperse dozens of protesters who threw stones outside the Al-Aqsa Mosque, Islam’s third-holiest site, after Friday prayers. “Several hundred worshippers threw stones at police who were stationed at the Mughrabi Gate, forcing them to go onto the plaza and push them toward the middle,” Israeli police spokeswoman Luba Samri said. An AFP correspondent said the forces had used sound bombs to disperse the crowds. Two people suffered minor injures, while one person was arrested for attempting to stab a policeman as he was being taken into custody, another Israeli spokesman added. The unrest broke out after days of tension at the compound.  Nine people were arrested Thursday. Five were Arab Israelis, who were accused of threatening Jewish and Christian visitors to the site, and four Israeli Jews, three of them right-wing activists who tried to force their way onto the plaza.

The Attorney general's office will charge Hasan with attempting to stab a soldier and throwing rocks at Israeli police.   Attempted murder . Its just "child's play" to Ali Abunimah of  the Electronic Intifada..