Happy Birthday to the Blue and White 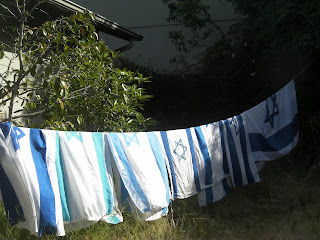 On Oct 28, 1948, 64 years ago, five months after the country's establishment, the  Israeli flag was adopted as a symbol of the new nation.  The flag consists of a 6 pointed  star of David between two horizontal blue stripes.   The design is evocative of the Jewish prayer shawl, or tallit .


Today is a great time to remember one of the more famous Israeli flags from history. Dubbed the "Ink flag"- it was reportedly made from a sheet  with two blue ink stripes drawn on it.  The star in the middle was removed from an old first aid kit. 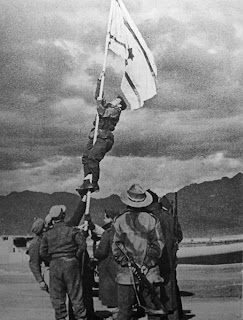 On March 10, 1948  the Israeli Defense Forces reached the shores of the Red Sea near Eilat and captured  the territory without a battle- this improvised flag was raised to commemorate the victory.


Happy birthday  to the flag of Israel.  Long may she wave
Posted by Dusty at 11:15 PM