Adding Up The Death Toll 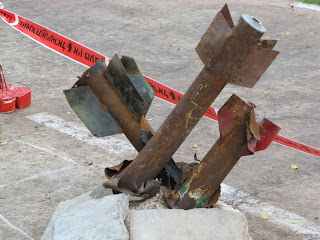 Over at Popular Resistance, Professor Mazin Qumsiyeh of Bethlehem and Birzeit Universities is supporting Mahmoud Abbas as he speaks in front of the UN to ask for a Palestinian state to be recognized. The professor is not as pleased with Netanyahu's speech, commenting that he was "just amazed at how many lies can be packed in one speech".

He then posts an extensive chart, meant to show the imbalance of power between Israel and the Palestinians. I don't plan to cover all of this, or go into it too extensively (for example, under the precise term "Nature" we get Colonizer/Occuper vs. Occupied People, a lie too big to be unpacked in a blog post. This section, however, caught my eye:

And it occurs to me, looking at this, that it represents a number of the things that are wrong and false with the way that the conflict is discussed by those who hate Israel. Don't get me wrong, I'm not a professor at Birzeit University, but I was a history major, and I like to think, something of a critical thinker, and my alarm bells are going off as I look at this.

I think I'm going to need to break this down into three separate posts, so let's start today with the casualties. This chart does not indicate a divide between military, civilian, and paramilitary, but the Israeli numbers are rather interesting. Clearly that 6,000 cannot include military deaths, in which case we run well over that before getting to 1973, so presumably this covers civilian deaths. Assuming that this is an honest chart, we are then to presume that the appalling 75,000 figure applies to Palestinian civilians? It seems we have to presume that.

I spent a while trying to make this work. Now, admittedly, I did not use any sophisticated source material, this is all from popular sites on the Internet. However, I believe that the only way to make the numbers add up is to sit down and enter in all Palestinian loss of life in any conflict, since 1948, using both combatant and non-combatant deaths, and using the top numbers in any given conflict where it is disputed. So, for example, Black September is included in the count, and the number used must be the high one of 20,000, not the low count of 3,400.

Now, is this fair reckoning? By my estimation, there are two problems with it, one being that Israeli military deaths are being excluded, and Palestinian combatant deaths counted in, also that the Palestinian count include people killed by non-Israelis who were not acting for Israel in any way. Conceivably, those who died in Black September could be considered victims of the overall conflict, but that line of reasoning is going to get us into trouble down the road, when we start looking at that refugee claim more closely.

But by any reckoning, leaving Palestinian combatants in and Israeli combatants (and diplomatic personnel, and various others) out, which is the only way I can make sense of these numbers, is deeply dishonest, and serves an obvious agenda.

I should mention that that this came to me courtesy of Tikkun Magazine and the Network of Superspiritual Progressives.

Tikkun Magazine? Does that mean Michael Lerners publication is now promoting the classically anti-Semitic Mazin Qumsiyah? Thats not good. Of course, Michael Lerner has Rae Abileah, speaking at his High Holiday Services. Rae has made a name for herself interrupting Jewish community speakers. Not exactly an appropriate role for a holiday that places such a strong emphasis on appropriate speech

Well, at least he didn't invite Alice Walker back. Michael can learn from previous mistakes.

This is from a facebook page in SF:Marc Samberg
Help needed from those who have access to internet radio and can get KQED. As many of you know, the Museum of Children's Art in Oakland (MOCHA) cancelled the "children's art" exhibit from Gaza sponsored by the "Middle East Children's Alliance" (MECA), much to the fury of the "hate-Israel" crowd.

We have just been informed that tomorrow, KQED (88.5 FM) Forum will have Doug Kahn and also MECA's executive director Barbara Lubin (who once called Hezbollah terrorists "ordinary schleps like the rest of us").

9:30-10 AM. Call early. Ask Barbara Lubin if she thinks Hamas are also ordinary schleps. Or if the children of Sderot, under Hamas rocket fire for years, are also part of the Middle East.

Call-in # is 1 866 733 6786...would be great to get some friendly calls supporting JCRC efforts to persuade the museum not to hold the exhibit.