The Museum of Childrens Art in Oakland: The Controversy Continues

The controversy has not ended. 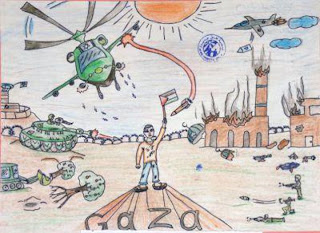 Here's yet another one of the "controversial" pieces of children's art from Gaza, that was originally scheduled to be displayed at the Museum of Childrens Art in Oakland, sponsored by MECA, the Middle Eastern Childrens Alliance. Maybe I'm being cynical, but why would children in Gaza print in English, unless they were being specifically coached to create a display for western consumption? If the claim that this art was created as part of a "psychosocial program that uses the arts and creative expression to help children in Gaza recover from trauma", why would they have children write in a language they were unfamiliar with?

Additionally, its recently been disclosed that Khalil Bendib, a cartoonist with a history of using classic anti-Semitic imagery had been commissioned to entertain and educate children at the MOCHA exhibit. Short of Carlos Latuff, I couldn't imagine a worse choice. And yet, "Jewish" Voice for Peace, oblivious as usual to the overt anti-Semitism and Jew baiting of this exhibit, has signed on as a co-sponsor.

Interesting enough, a previous exhibit of Palestinian children's art was shown in Berkeley in 2002, at La Pena, as part of a nationwide anti-Israeli tour. The art contained such universal messages of peace and brotherhood as "Death for Israel," "From North to South it's only Palestine" and "Bloodshed is the language of Israel."

Further controversy emerges from our friends at Fresnozionism pointing out the remarkable sophistication of the drawings, and questioning MECA's claim that they were drawn by children 9-11

"I showed them to a professor of Art at a local university. Here is what she said about them:

The paintings (color drawings) are highly sophisticated especially in relationship to detail. Did you see the barbed wire? Also, there is a carefully drawn Star of David in each work. The authenticity of the painting is remarkable for a child’s hand. The drawing of the planes and helicopters, the man in the tower, the dynamic brushstrokes that are well conceived and controlled all seem to project a more mature approach to art. Could these “children” be in their late teens, college age, or young adults [MECA says they were 9 to 11 years old]? According to the the quote, “much of the artwork was produced by children.” I wonder how “much”? Also, it is possible that the “children” were directed by an adult who supervised and perhaps completed the initial drawing."

Cecilie, we are all sure that you and Barbara and the entire Al Awda/ AROC cru will be exploiting this for as long as you can. Its not over yet.


UPDATE:
No, its not over. An ultimatum has been delivered to MOCHA by the "Israel is always wrong" folk. They are threatening a protest of MOCHA, and will show the "art" one way or another, either inside or out on Sept 24 from 1-3.
Posted by Dusty at 8:56 PM