Protesting a Childrens Art Museum: MECA to MOCHA " Scorn us and Suffer"

In folklore, the vampire can not enter your home unless you invite him in. Now the Museum of Children's art in Oakland is experiencing just a taste of what happens once you let the vampire across your threshold. Lets hope other municipal institutions learn from their example, and never open their door, not even a crack, to the haters of Israel.

Barbara Lubin of the Middle East Children's Alliance has called for a weekend of revenge against the Museum of Children Art in Oakland. Her compassion towards children doesn't extend to the children of Oakland, apparently. Her announcement follows:

The board of directors of Oakland’s Museum of Children’s Art cancelled “A Child’s View from Gaza,” a long-planned exhibit of Palestinian children’s drawings. The Jewish Community Relations Council and the Jewish Federation of the East Bay openly claim credit for forcing the MOCHA board to cancel the exhibit.
Protest MOCHA’s Cave-In
Friday, Sept. 23 at 3 p.m.
Outside MOCHA, 538 Ninth St. near Clay, Oakland
(a few blocks from the 12th St.-City Center BART)


The Bay Area and Oakland in particular are known for our diversity and commitment to free expression and social justice. We will not be censored. The show must go on!
Family-Friendly Grand Opening: “A Child’s View from Gaza”
Saturday, Sept. 24, 1-3 p.m.
Join us for art, music, poetry, and food to celebrate the
the opening of the exhibit outside MOCHA at 538 Ninth St.
near Clay, Oakland.

Note that the first protest is called for after Mocha is closed. Barbara knows that the displayed pictures will upset children - she know that video of upset children and parents will simply reinforce to Mocha that they made the right decision. You can't have that.

The second protest is "Family Friendly"- does that mean that the offending pictures wont be shown? Does that mean Barbara knows her original display was not "family friendly"?

Rev. Jack Shriver of the first Presbyterian Church in Oakland has offered to host the drawings. He is no stranger to controversy, having hosted the notorious "Never Again" tour several months back. So the "art" of the Children of Gaza has a venue, now. Barbara Lubins vendetta against the Museum is motivated simply by the need for revenge and her own personal intolerance.

The jury's still out on the influence of adults in the creation of this art. Its been suggested the children were told to model their drawings after Carlos Latuff. 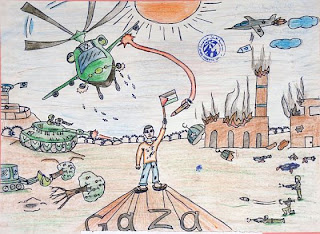 A bit of a Freudian slip-- it is Barbara LUBIN, not Lupin.
Though of course, instead of a vampire, one could have been thinking of something more...wolvish?

Thank you- correction made.

And thanks, NQ for the reminder of this incident http://www.unewsonline.com/2000/11/30/netanyahucancelsspeech/

"Lubin said one of the primary goals of the anti-Israeli protesters was to stop Netanyahu from speaking. "

Gives you an idea of her commitment to free speech and open exchange of ideas.

The new protest announcement follows: (MOCHA was "forced" to cancel according to the haters....)

The board of directors of Oakland's Museum of Children's Art cancelled
"A Child's View from Gaza," a long-planned exhibit of Palestinian children's drawings.
The Jewish Community Relations Council and the Jewish Federation of the East Bay openly claim credit for forcing the MOCHA board to cancel the exhibit.

I was at the rally held by the Jew-haters in front of MOCHA today at 3p.m. I proudly held an Israeli flag while fending off assorted batteries and assaults to my person. They were all duly punished by me; flag poles are useful.
The usual suspects were there yelling for the elimination of Jews, I mean Israel. Two dykes from my favorite group were front and center: QUIT. I asked them when the next LBGTQ parade will be held in Gaza, but they ignored me.
Before the rally, about 20 people met in Old Man's Park at Clay and 9th Street for Muslim prayers. The imam spent about 20 minutes giving the crowd a political talk about the evil people who forced MOCHA to cancel the drawings. He made the point repeatedly that American Muslims are the brothers of the "people in the 'hood." He said both groups are controlled by the same forces of hatred. Who could he have meant?

From an article in the Forward:
"Lubin told the Forward that MECA was prepared to provide its own curatorial materials, as well as psychotherapists to help the children cope with the violence observed in the exhibit."

As a parent, I can say without hesitation: If your exhibit requires on site psychotherapists to ease children through the disturbing imagery displayed, (Duh!), maybe it wasn't appropriate for children to begin with.