Censoring Childrens Art from Gaza: MECA does it to themselves 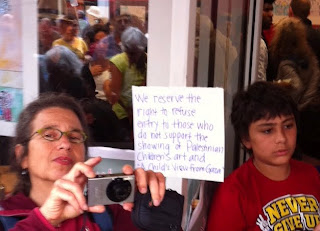 Thanks, Younger Of Zion, for the photo. 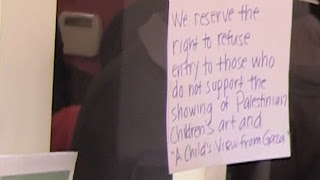 Here it is, a bit closer

The Middle East Children's Alliance (MECA), sponsors of the "Children's" art from Gaza, have chosen to restrict access to their exhibit. Their signage states "We reserve the right to refuse entry to those who do not support the showing of Palestinian children's art and "A Child's view from Gaza". There is also documentation of people turned away at the door by the MECA thought police, though there are additional reports that a token Zionist was allowed entry.

There seems to be no limit to the hypocrisy of the Middle East Children's alliance. They've stated "For 23 years, MECA has been a witness to how organizations like the Jewish Community Relations Council and Jewish Federation can intimidate groups and individuals who try to present the reality and perspectives of Palestinians.", concealing their own involvement in the intimidation of the Jewish community- through the coordinated interruption of Jewish community events. Barbara Lubin, the director of MECA was arrested 3 years ago at the San Francisco Jewish Community Center, for terrorizing participants attending classes given in honor of Israel's 60the anniversary. Eleven years ago, Barbara Lubin accomplished her goal of shutting down alternative voices and physically prevented BenyaminNetanyahu from speaking to a capacity crowd in Berkeley. 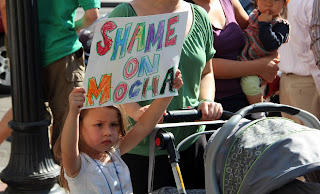 Oh, yes. Here we have living proof that adults take advantage of children and falsify their art to further their political agenda.
Posted by Dusty at 11:57 AM

"Board member Randolph Belle said the decision was based on the violent nature of some of the work in the show. “Basically we got some [calls from] concerned parents, the Jewish Federation and MOCHA community members,” Belle said, “stating that they didn’t feel that children should be exposed to these images in a public space.”

Belle describes MOCHA as a small organization that was caught off-guard and overwhelmed by the emotional reaction the exhibit generated. “We probably did not diligently look at the implications of having this show,” he said. “I don’t know if it was naïveté or just a misjudgment, but there were some mistakes made, and we are paying for them right now.”