Stop Funding Israeli Rerror and other Words of Wisdom from Marrickville 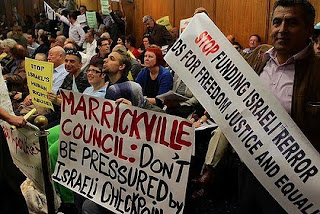 Marrickville Australia recently found itself embroiled in the BDS web. In December, the 12 member town council led by green Party member Fiona Byrnes voted to ban Israel products. After a feasibility report showed the proposed boycott would cost the town over 3.7 million dollars, 6 members of the town council reversed their position.

At the council hearing, Marrickville resident Lesley Marsh took the microphone: "The division in this room is the perfect example of what the BDS does: it takes moderate people and moves them to extremes."

Independent Morris Hanna, president of the Marrickville Chamber of Commerce,said "It's not a local issue ... this is making a joke of us around the world.".

"Marrickville mayor Fiona Byrne has conceded that her council’s plan to impose sanctions on Israel will have no impact on its troubled relationship with Palestine. But Byrne remains committed to the Palestinian cause, and has threatened that unless Israel complies with UN resolutions, Marrickville will launch an atomic assault on it.

Byrne admits that her decision to launch a nuclear war will come into conflict with another previous pointless resolution making Marrickville a nuclear-free zone.

As part of her willingness to take action, Byrne has also begun deploying Marrickville’s council rangers to the Middle East, where they will issue infringement notices for all Israeli settlers who have parked their vehicles on Palestinian soil.

Byrne acknowledges that her plan has its critics. “Some say have argued that it’s a complex situation, and that outsiders shouldn’t just waltz in and take sides,” Byrne said. “We plan to bomb them as well.”

“We think that Israel’s occupation of Palestinian territory is just as much a part of Council’s jurisdiction as a tree in a Newtown backyard whose roots are encroaching on a neighbouring property,” she added. “The only difference is that we respond to Palestine’s concerns in under a month.”

The Greens proposing BDS for Marrickville put as much thought and effort into this proposal as their colleague with the the "Stop Funding israeli Rerror" banner. Poorly conceived, poorly executed.
Posted by Dusty at 8:57 PM

I wish I knew if I were opposed to Israel rerror. I'm not sure what that is.

It's the sound made during the leyning of the megillah whenever Haman's name is mentioned.

Greggers are subsidized - who knew?