BDS: A Decade of lies, hoaxes and failures

Eric Walberg's recent article "BDS update: Breaking new barriers" probably wasn't meant to be funny, but its hard not to read it and giggle. Since its introduction at Durban, 11 years ago, the BDS tactic has had racked up a well documented record of failures. Walberg doesn't appear to have noticed yet.

Walbergs article- found here- begins with a hoax:
dissidentvoice.org/2011/04/bds-breaking-new-barriers/
He exploits 92 year old activist Pete Seeger who participated in an online special promoting the progressive Israeli Arava institute. Walberg claims Seeger repudiated his involvement with the project which had the audacity to promote peaceful co-existence in the region. The real story "The 92-year-old musician also said that contrary to the Adalah-NY report, he does not regret taking part in last November’s online peace rally “With Earth and Each Other...”

Other "victories" according to Walberg?

Dead end displays on campus that are widely ignored. Dead end petitions that go nowhere. Self congratulatory films. (Surprised he didn't mention this classy display of barbed wire across a busy path at UC Berkeley during " Israel Apartheid week") 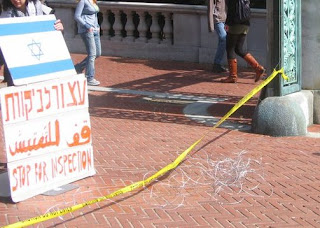 Walberg couldn't resist claiming that Hampshire University " became the first to divest from the Israeli occupation, following its anti-racism Action Awareness Week 2008." Does anyone want to remind poor Eric that he is continuing to promugate a lie-one begun by anti-Israel students on Hampshire's campus. An open letter from Hampshire College President Ralph Hexter and their Board of Trustees Chair Sigmund Roos plainly refutes this untruth: "Hampshire College has made a strenuous, good-faith effort to explain its decision to exit a problematic mutual fund. We make this effort again, without equivocation: Israel was not the cause for divestment from the State Street fund."According to the letter, Hampshire's decision was based on a variety of criteria, "none of them having to do with Israel. … No other college or university (should) use Hampshire as a precedent for divesting from Israel, since Hampshire has refused to divest from Israel. Anyone who claims otherwise is deliberately misrepresenting Hampshire's decision and has no right to speak for the college."

Eric claims a year of "spectacular and frequent BDS actions"- referring no doubt to pudgy women in pink bathrobes bothering shoppers, or failed attempts at song and dance routines.

Wallberg claims "The most important BDS-inspired event of 2011, marking the first anniversary of the tragic Israeli attack on the Mavi Marmara last May, will be the Free Gaza Movement flotilla expected in late May, when 12 ships carrying a thousand peace activists with humanitarian supplies will head for Gaza".

Eric. Eric. Eric. Don't you ever read what the leaders of your failed movement have to say? This has never been about delivering "humanitarian aid" to the people of Gaza (frankly, they don't particularly want the mismatched shoes or expired medicine)

This is about opening the sea lanes to Iranian weapons.
Posted by Dusty at 9:51 AM