Vile Anti-Semitism from the Folks at Free Gaza Movement


From Sarah AB at Harry's place:

The Free Gaza organisation, whose supporters include Desmond Tutu and Noam Chomsky, has recently posted this on Twitter, a video with the caption “Zionists operated the concentration camps and helped murder millions of innocent Jews”. 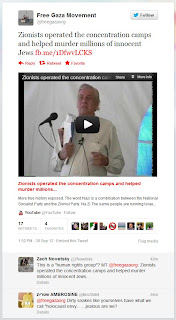 The speaker begins by asserting that the word Nazi is derived from an alliance between National Socialists and Zionists which was forged secretly in 1923. It doesn’t get any better. Apparently Zionists were directly responsible for the Holocaust. Will any of the organisation’s many endorsers think again, in the face of this naked bigotry?

UPDATE
From our friends at San Francisco Voice for Israel