The anti-Israel cru took to social media, expressing their displeasure with their usual blend of subtlety and nuance. 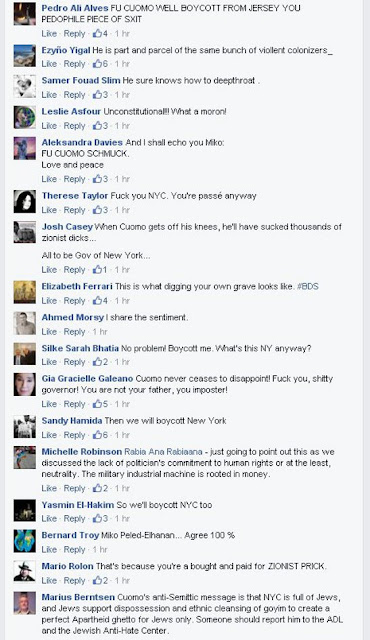 JVP- "Jewish" Voice for Peace and Code Pink  responded with....wait for it... a petition, displaying their characteristic moral inversion.

Boycotts are a constitutionally protected, nonviolent tactic used by social movements to achieve justice and equality.

New York State should not single out supporters of Palestinian rights for a politically-motivated McCarthyite blacklist.

After all, the only state worthy of being singled out is the worlds' only Jewish state and the only liberal democracy in the region.  And  boycotts that are meant to protect the Jewish state, our closest friend and ally in the region could never be a "constitutionally protected non-violent tactic"., because, well, just because.

The very rights the Israel haters demand for themselves and their movement, they systematically deny to others

Its enough to make Orwell turn in his grave.
Posted by Dusty at 7:50 PM