Last years valedictorian from the  Technion medical school (Israel's version of M.I.T ) was Mais Ali-Saleh , a Muslim woman who grew up in a small village outside of Nazareth.  Anti-Israel activists cried "tokenism".

A remarkable program, financed by Jewish philanthropists and the higher Education Council of Israel has made a concerted effort to ensure that once Arab students are enrolled, that they succeed, flourish and eventually graduate.

Via Wikipedia
The Landa Fund also supports young recent immigrants and Israeli Arabs to acquire university degrees. The Fund has invested more than $50 million at all six of Israel’s universities, allowing thousands of Israeli youth to pursue higher education. The Landa Fund also supports non-profit organizations in the fields of education and the advancement of shared citizenship, tolerance, and understanding between Israel’s Jewish and Arab citizens... 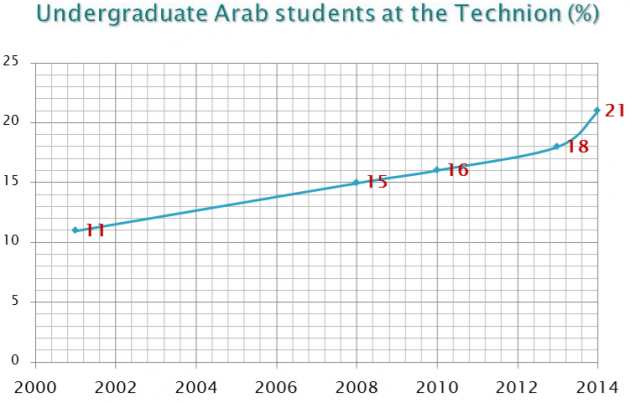 "...Arab students are given intensive lessons in Hebrew, English, math, and physics in a summer camp before they enroll in the Technion. As students, each has two advisers, one for academics and one for social and cultural matters. The advisers are top Arab students who are paid for their work."

Israel is not an apartheid state, and those who slander this diverse and pluralistic democracy do so not out of ignorance, but out of hate. In the past Arabs students were underrepresented in Israeli universities. A remarkable couple took concrete steps to change that. In a short time, they did more to promote equality, diversity and yes, justice, and accomplished more  than 13 years of Boycott, Divestment and Sanctions referendums.

Thank you, Benny and Patsy Landa, for showing us that there is another way. If only the Israel-haters were not too blind to see the lesson here.
Posted by Dusty at 7:45 PM