Aw.  The Saudis have  rejected 20,000 cases of Palestinian olive oil

Al-Barqawi said the oil was tested in the Palestinian Ministry of Agriculture laboratories before being exported and that they fit all international standards.

He said that the Saudi Arabian authorities have been holding the vehicles, carrying more than 300 tons of Palestinian olive oil, since Sunday.

Al-Barqawi pointed out that Saudi refused to allow the oil after they tested quantities from the bottom of the container; “since the oil is fresh it always leaves some sediment at the bottom and that is what they tested.”

He added that Saudi Arabia has been importing Palestinian olive oil for 40 years.

I'm sure its not going to be a total loss.  Since they haven't cared about quality up to now, maybe Paul Larudee and the ISM can re-bottle it in one of their infamous bottling "parties" at Grassroots House, on Blake Street in Berkeley.

Got love the extra special ISM labels, too. 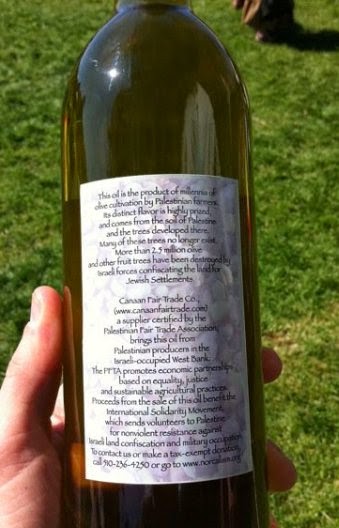 I'm sure the Palestinians would have better success importing their high quality suicide vests.