Jewish Voice for Peace. Finding common cause with terrorists 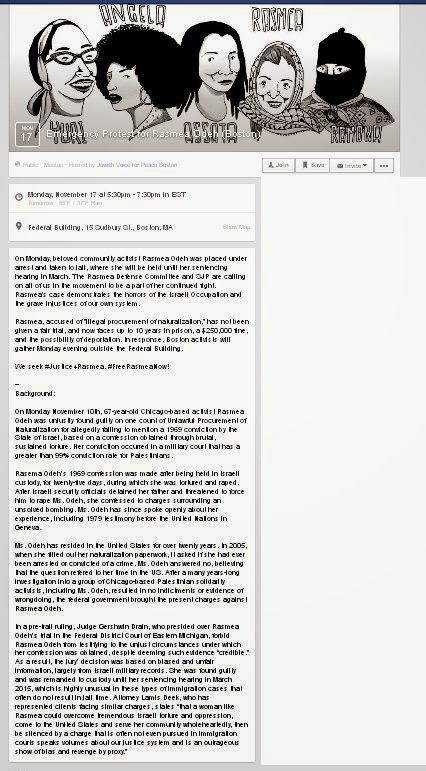 On Monday, beloved community activist Rasmea Odeh was placed under arrest and taken to jail, where she will be held until her sentencing hearing in March. The Rasmea Defense Committee and SJP are calling on all of us in the movement to be a part of her continued fight. Rasmea's case demonstrates the horrors of the Israeli Occupation and the grave injustices of our own system.

Rasmea, accused of "illegal procurement of naturalization," has not been given a fair trial, and now faces up to 10 years in prison, a $250,000 fine, and the possibility of deportation. In response, Boston activists will gather Monday evening outside the Federal Building.

The JVP "Background" follows, which predictably, neglects Rasmea's role in the murder of 2 young men. My comments in italics

On Monday November 10th, 67-year-old Chicago-based activist Rasmea Odeh was unjustly found guilty on one count of Unlawful Procurement of Naturalization for allegedly failing to mention a 1969 conviction by the State of Israel, based on a confession obtained through brutal, sustained torture.

Her conviction occurred in a military court that has a greater than 99% conviction rate for Palestinians.


Rasema Odeh’s 1969 confession was made after being held in Israeli custody, for twenty-five days, during which she was tortured and raped.

After Israeli security officials detained her father and threatened to force him to rape Ms. Odeh, she confessed to charges surrounding an unsolved bombing. Ms. Odeh has since spoke openly about her experience, including 1979 testimony before the United Nations in Geneva.

The confession was only part of the evidence against her.  There was substantial physical evidence as well.

"Rasmeah Odeh was more involved than I was [in the grocery store bombing] ... I only got involved during the preparation of explosives. We wanted to place two bombs to blow up consecutively. I suggested to have the second bomb go off five or six minutes after the first bomb so that those who get killed in it would be members of the army and secret service, but it did not explode. They diffused it 20 seconds before it exploded."

JVP's support of this convicted terrorist went beyond Facebook listings and organizing demonstrations. They also filed an amicus brief with the court, claiming Odeh had an 'exemplary personal history" that precluded her from being a flight risk.

Exemplary personal history?  Rasmea Odeh was complicit in the deaths of 2 young men, and in the attempted bombing of the British consulate in Jerusalem. A search of her home found grenades and explosives.

There is nothing that indicates that this vile, evil woman has shown the slightest remorse or regret about her role in these terrorist attacks. By coming to the defense of this unrepentant Jew-killer, JVP has again chosen to stand with those that would destroy our people.

With thanks to the Legal Insurrection Blog, for their superb coverage of the Rasmea Odeh trial

Jewish Voice for Peace: The most inappropriately named organization since the Utah Jazz.

I wonder why there isn't a Muslim Voice for Peace.